English
Freewayphobia (a.k.a. The Art of Driving the Super Highway) is an educational animated short starring Goofy, which focuses on safe driving habits. It was given a sequel of sorts, Goofy's Freeway Troubles, which has a similar focus on freeway safety.

Freewayphobia was initially developed as an updated version of 1950's Motor Mania, whose depictions of cars and safety procedures had become dated less than fifteen years after its release. It and its sequel, Goofy's Freeway Troubles, were the last two classic Goofy shorts produced and the only two Goofy educational shorts; the final short fully made for theatrical distribution, Aquamania, was released more than three years earlier. It is sometimes referred to as Freewayphobia No.1, which was its original production title.

Although both Freewayphobia and Goofy's Freeway Troubles were made with distribution to schools and other educational organizations in mind, they were released theatrically in order to recoup production costs quicker and establish the credibility and value they had in that the shorts were not only educational, but had played in theaters.

The cartoon begins with a narrator speaking on the development of transportation in America, eventually introducing the freeway system.

The narrator then goes on to describe the different driving rules of the freeway by using three exaggerated, but specific examples of bad driving habits, all represented by Goofy. Driverius Timidicus is an overly-timid driver who drives too cautiously, while Motoramus Fidgitus is an overly-impatient motorist who is reckless in his actions. The final example, Neglecterus Maximus, is an inattentive driver who endangers others with his distracted driving.

The cartoon ends with the narrator and Goofy urging the viewers to avoid these types of drivers if at all possible and to use common sense to avoid becoming an example themselves. 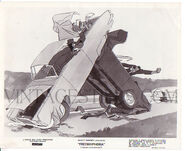