This article is about the film. For the Phineas and Ferb song, see Frenemies. 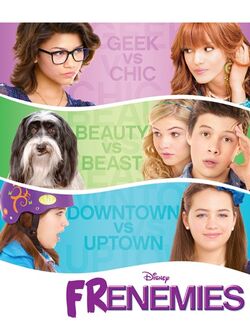 Frenemies is a 2012 television film and anthology based on the novel of the same name by Alexa Young. It features an ensemble cast of Bella Thorne, Zendaya, Stefanie Scott, Nick Robinson, and Mary Mouser. The film follows three pairs of friends that go from friends to enemies and back again. The film is to be directed by Daisy Mayer and written by Dava Savel, Wendy Weiner, and Jim Krieg. The Disney Channel Original Movie premiered on January 8, 2012 in the UK and premiered on January 13, 2012 in the USA.

The movie is divided into 3 stories. Avalon and Halley make cameo appearances in the first and third stories; they may possibly be the moral of the story.

The first story is about a science whiz teenage boy at Waterbury High School named Jake Logan (Nick Robinson) who is best friends with his dog, Murray (Winston). A popular girl named Julianne (Stefanie Scott) tries to come between them as she tries to get Murray out of her way as Murray sees right through her ruse. Determined to get another "A", she makes Jake her "boyfriend" (a usual tactic to get boys to do her assignments). When she finds out that Murray tried to flush her love letter to Jake down the toilet, she hatches a plan to get Murray out of her way for good. She steals Jake’s national prize certificate in molecular astrophysics from NASA, drenches it in her perfume like she did with her love letter, and drops it through the mail slot in Jake’s front door. Just like Julianne expected, Murray takes Jake’s NASA certificate into the bathroom and attempts to flush it. Jake, who is able to save his certificate, gets angry and yells at Murray to go away. Murray follows his command and runs away from home. A classmate named Savannah O'Neal (Mary Mouser), who loves to skateboard and has a crush on Jake, finds Murray and takes him to her house. The next day, Jake starts to worry that Murray might not return but manages to finish his and Julianne's science project. At school, Jake attempts to dress cool to impress Julianne, but Avalon Greene (Bella Thorne) and Halley Brandon (Zendaya) intervenes and tone down his appearance. When Jake discovers Julianne's scheme, he refuses to give her the project. Savannah uses this opportunity to expose Julianne’s ruse of using "boyfriends" to get A’s which results in Julianne being caught. Murray runs in and knocks over Julianne and the science project. Although the project is destroyed, Jake is happy to see Murray and they become best friends again.

The second story is about Avalon Greene (Bella Thorne) and Halley Brandon (Zendaya) who created a web magazine called "GeeklyChic". During school, Halley gets a call from her and Avalon's favorite New York City publishing company run by Cherie St. Claire (Jessalyn Wanlim). She thinks it's a prank but it’s really not. Cherie St. Claire tells them to go to the publishing company’s headquarters in Manhattan, New York to ask them something that could change their lives. During the talk, Cherie St. Claire tells Avalon and Halley that she likes their web magazine and offers to buy it, but decides to only let one of them be the senior editor. Cherie St. Claire decides to let each of them write a cover article and will judge who wrote the best article as that writer will become the senior editor. Avalon and Halley, who both want to be hired as senior editors, both decide to interview a French singer named Jean Frank after his first American sold-out concert which leads them to become frenemies. At the end, they decide that they will share the article. Cherie St. Claire becomes angry and decides not to hire either of them. The television show “Teens Now” picks up their article about Jean Frank changing his image as he was only posing as a singer from Paris, France. “Teens Now” also broadcasts their blog’s website for their audience to check out. Seeing that their web magazine has gone global on their hit counter map, Avalon and Halley make up as best friends again.

The last story in the film is about Savannah O’Neal and Emma Reynolds (Mary Mouser plays both roles) who trade places to see how their lives are. Savannah is a tomboy who skateboards, lives with her dad and 3 brothers, attends Waterbury High School, and has a crush on Jake Logan (Nick Robinson). Emma, on the other hand, comes from a proper well-off English family, is an only child, goes to private school, and just wants to be a regular girl. While at the mall picking out shoes to buy, Savannah and Emma come face to face and decide to trade lives for one week. Savannah sees how Emma's life is and Emma sees how Savannah's life is. They seem to not like their new lives and want to switch back. While at Emma's birthday bash, Savannah (posing as Emma) breaks up with Emma's boyfriend, Lance Lancaster (Dylan Everett), as Emma (posing as Savannah) invites Jake (Savannah’s crush) to Emma's birthday ball with her. Emma and Savannah switch back and become friends as everyone in the cast of the three stories of the film attend Emma's birthday ball.

The film was shot in Toronto, Ontario, Canada. It is very evident that it was shot in Canada because in a scene, you can see Conservative Party of Canada campaign signs in the background. This means that some scenes were filmed before the Canadian general election, 2011, which occurred on May 2.

The film was released on DVD in the UK, alongside Geek Charming, on April 23, 2012. The following bonus features will be featured:

It premiered on Friday, January 13 on Disney Channel and got over 4 million views.

Retrieved from "https://disney.fandom.com/wiki/Frenemies_(2012_film)?oldid=4402254"
Community content is available under CC-BY-SA unless otherwise noted.