7-Up
Fresh-Up Freddie is a character created by Disney as an advertising spokesman for 7-Up in 1957. He was voiced by Paul Frees. He was eventually replaced by another 7-Up mascot named Spot.

Leo Burnett Agency created the Freddy ad campaign for 7-Up and its sponsorship of Disney’s prime time Zorro TV series. The Disney studio made the commercials and designed the character (essentially a hybrid of Panchito and the Aracuan Bird from The Three Caballeros).

He gave viewers lessons about how to plan successful parties and picnics by having a plenty of 7-Up on hand. Fresh-Up Freddie often was dressed in human clothes. Freddie also appeared in Zorro 1957 series commercial intermissions. Here, he was put against Pete the Cat. Fresh-Up Freddie also had a minor merchandise of his own. 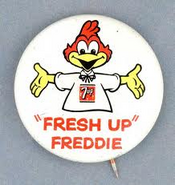 Add a photo to this gallery
Retrieved from "https://disney.fandom.com/wiki/Fresh-Up_Freddie?oldid=4295035"
Community content is available under CC-BY-SA unless otherwise noted.