The Jungle Book (SNES and Sega Genesis version; as an enemy)

Sleeping, his friends, new heirs to the forest

Active
Friend Owl is a supporting character of Disney's 1942 animated feature film, Bambi. He is an owl with close relations to the royals.

Friend Owl is a local owl in the forest, known by all of the residents. He appears to be close to the royal family (Bambi, his mother, and the Great Prince of the Forest). While incredibly cheerful most of the time, Friend Owl is better known for his mildly grumpy attitude. He strongly dislikes the Springtime because the animals and birds tend to become twitterpated (which is his nickname for falling in love) and always disturb him during that time of the year.

As said above, he holds a friendship with the forest's royal family, most notably the Great Prince of the Forest as seen in Bambi II, where Friend Owl and the Great Prince commonly speak with each other.

In the film, Friend Owl is the first character seen in the movie. In the beginning, he returns home (apparently from a hunt) and goes to sleep, until he's later awakened by Thumper, who tells him that "the new prince is born". Thus, Friend Owl joins several other animals in a thicket, where he first sees Bambi and is the first to congratulate Bambi's mother. After watching the fawn take his first steps, Friend Owl shoos the others away after hearing Bambi yawn. Besides a brief appearance during "Little April Shower", Friend Owl isn't seen again until he's rudely awakened by the birds singing "Let's Sing a Gay Little Spring Song".

When his attempts to silence the birds fail, Friend Owl moves to another tree, but is rudely awakened again, this time by a stag sharpening his antlers on the tree. Friend Owl is grumpy at first but cheers up when he recognizes the stag as Bambi, who is now a young adult. After Thumper and Flower appear, the three notice some birds acting strangely. When they ask about it, Friend Owl explains that they're "twitterpated" (in love). He then goes on to explain what being twitterpated involves, warning the trio that it can happen to them as well, shocking the three into promising that this won't happen to them (which it promptly does).

Friend Owl isn't seen again until the very end when he once again goes to a thicket to meet some newborns, this time the twins of Bambi and Faline.

Eventually, Friend Owl finds a suitable replacement: a young doe named Mena, who was friends with Bambi's mother. Though Bambi is angered when he learns that his father was giving him to someone else (along with Friend Owl feeling guilty for breaking the news at the worst time), he eventually, yet reluctantly goes along with it. Friend Owl later appears along with Thumper, Flower, and Mena after Bambi's climactic fight with Man's dogs and, seeing Bambi and the Great Prince's reunion, smiles at Mena, who smiles back and leaves. He later appears when Thumper tells an exaggerated version of the fight. He sees Bambi and Faline kiss, and grumbles "twitterpated". When Flower asks what that is, Friend Owl promises to tell him when he's older.

Friend Owl makes a small cameo in Disney's animated feature film, Fun and Fancy Free during the first segment, Bongo, where he is seen among other animals, laughing at the titular character for failing to climb a tree

Friend Owl made a small cameo appearance in the 1960 Disney animated short film, Goliath II. He is seen being woken up when the elephants jumped into the water to escape the mouse who scared the elephants.

Owls resembling Friend Owl appear as enemies in the video game adaption of The Jungle Book.

In Disney's Hollywood Studios' version of Fantasmic!, Friend Owl can be briefly seen during the bubble montage.

Concepts of Friend Owl with owlettes, suggesting he may have been female at some point.

"You begin to feel weak in the knees." 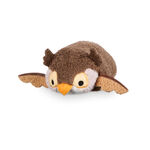