Friends on the Other Side

"Friends on the Other Side" is a song from the film, The Princess and the Frog. It is performed by Keith David as Dr. Facilier, as he lures Prince Naveen and his valet Lawrence into a deal that climaxes with Naveen transforming into a frog.

The prologue of the song starts when Facilier introduces himself to Prince Naveen and Lawrence. He then takes the two of them to his voodoo house located in a nearby alley. Upon arriving, he magically activates the sign and opens the entrance door to display his power. In the midst of this, he reads Naveen's palm and come to the conclusion that he is a visiting prince. Amazed, Naveen tells Lawrence of Facilier's palm-reading, but Lawrence confides in Naveen that he believes him to be a fraud after seeing a copy of the newspaper in his back pocket. Angered by this, Facilier bursts into a song about his powers. The event ends when Facilier catches a sample of Naveen's blood in a talisman then transforms him into a frog.

When Tiana attempts to destroy the talisman, Facilier's living shadow grabs it and hands it back to the doctor. An enraged Facilier then teleports himself and Tiana back into the graveyard then transforms Tiana back into a frog. However, Tiana manages to regain the talisman by grabbing hold of it with her elastic tongue, destroying the trinket before Facilier can stop her. Upon her doing so, Facilier immediately becomes panicked and fearful, and frantically tries to recollect the pieces of the broken talisman as the song begins. Facilier's "friends from the other side" arrive, announcing their intentions to collect the doctor's soul as punishment for his failure to repay his debt. A horrified Facilier tries to persuade his former accomplices to provide him with another opportunity to redeem himself, and makes an attempt to escape, but the spirits grab hold of his shadow, thus capturing Facilier as well, and drag him, screaming, into the voodoo spirit world, where his soul will be doomed to remain for all eternity. With a flash of light, both Dr. Facilier and the spirits vanish, leaving behind only a tombstone with Facilier's name and horrified face engraved onto it, confirming the witch doctor's death.

Dr. Facilier:
Don't you disrespect me, little man
Don't you derogate or deride
You're in my world now, not your world
And I got friends on the other side

Voodoo Spirits:
(He's got friends on the other side)

Dr. Facilier:
That's an echo gentlemen.
Just a little something we have here in Louisiana
A little parlor trick. Don't worry.

I can read your future
I can change it 'round some, too
I'll look deep into your heart and soul
(You do have a soul, don't you, Lawrence?)
Make your wildest dreams come true

I got voodoo, I got hoodoo,
I got things I ain't even tried
And I got friends on the other side

Voodoo Spirits:
Are you ready

Dr. Facilier:
Now you, young man, are from across the sea
You come from two long lines of royalty
I'm a royal myself, on my mother's side
Your lifestyle's high, but your funds are low
You need to marry a lil' hunny whose daddy got dough
Mom and Dad cut you off, huh playboy?

Dr. Facilier:
Now y'all gotta get hitched but hitchin' ties you down
You just wanna be free, hop from place to place
But freedom takes green

Shake my hand, c'mon on boys
Won't you shake a poor sinner's hand
(both Naveen and Lawrence shake Facilier's hands)
Yes...
Are you ready?

Voodoo Spirits:
(Are you ready?)

Dr. Facilier:
Can you feel it?

Voodoo Spirits:
(You got what you wanted)
(But you lost what you had)
(Ohh...Hush!) 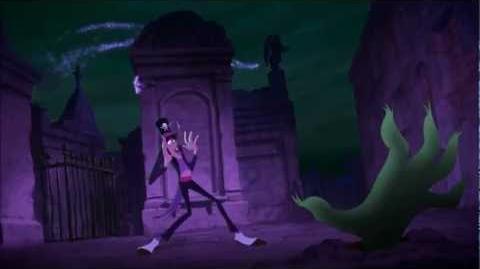 Retrieved from "https://disney.fandom.com/wiki/Friends_on_the_Other_Side?oldid=4315997"
Community content is available under CC-BY-SA unless otherwise noted.