His children arguing, Petunia getting mad at him

Buster
Fritz Robinson is a character from the film Meet the Robinsons.

Fritz Robinson is the uncle of Lewis, brother of Bud and Joe, brother-in-law of Billie and Lucille. He is married to Petunia and is the father of Tallulah and Laszlo. He is dominated by his wife and is very nervous around her and tries that his children don't bother her. 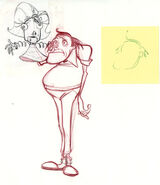 Retrieved from "https://disney.fandom.com/wiki/Fritz_Robinson?oldid=4244295"
Community content is available under CC-BY-SA unless otherwise noted.