Laputian Robot from Castle in the Sky

Frobo is a mysterious robot from the 2019 Disney Channel animated series Amphibia.

Frobo is a large robotic frog with long arms and glowing yellow eyes; His eyes look similar to those of Kermit the Frog.

The robot first appeared after Sprig accidentally created him in an abandoned factory. He followed Anne and her surrogate frog family on their road trip to Newtopia. He eventually reached them in Wartwood where he was befriended by Polly who gave the robot the name Frobo. As of "True Colors", he was smashed by King Andrias when he tried to prevent him from stepping on Polly, but she took his head and arm with her through the portal to earth.

In "The New Normal", his Head is still in Anne's Backpack, but promises to bring him back online by using Earth's technology.

In "Fixing Frobo", Polly was successful in reactivating him although he still has no body.

In "Anne-sterminator", Polly was seen sitting on Frobo's Head while watching a movie with Hop Pop, Sprig, Mr. and Mrs. Boonchuy, however his reactivition cause Cloak-Bot to locate Anne, he was left behind as Cloak-Bot chased after Anne, her Parents, and the Plantars.

In "Froggy Little Christmas", Frobo only had two appearances, his was in the basement while Anne started working on the Float for the Christmas Parade. In the Credits, he lets Domino sleeps on his Head. 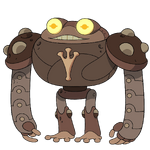