Disney Wiki
Register
Don't have an account?
Sign In
Advertisement
in: Characters, The Hunchback of Notre Dame characters, Disney characters,
and 13 more

Frollo's soldiers are the tertiary antagonists in Disney's 1996 animated feature film, The Hunchback of Notre Dame, and later serve as minor characters and allies to the heroes in its sequel. Two notable members are Brutish and Oafish Guard.

They first appear arresting a group of gypsies ordered by Judge Claude Frollo, who is their leader.

They also appear twenty years later at the Festival of Fools where two of them start a riot on Quasimodo who attended the Festival by accident. Esmeralda helps Quasimodo and puts the torture to a stop. When Esmeralda escapes into Notre Dame, Phoebus follows her but refuses to arrest her due to his permission to stop the torture on Quasimodo granted. When Frollo and his soldiers attempt to drag her outside of Notre Dame but were forced to leave by an enraged Archdeacon who warned Frollo not to touch her and Frollo orders them to guard every door. After Esmeralda escape from Notre Dame, they arrest a group of Gypsies and attempt to murder an innocent family.

Phoebus saves them and they attempt to execute him but the latter is rescued by Esmeralda. Frollo then orders them to burn Paris to the ground and they search everywhere and still no sign of her. At the Court of Miracles, they and Frollo captured Clopin, Esmeralda, Djali, Phoebus, Quasimodo, and a group of gypsies. They also chained Quasimodo on the Belltower to make sure he "stays there". During the execution of Esmeralda, an enraged Quasimodo rescues her after she passes out; two soldiers attempt to stop him but he swings a torch at them knocking them down and yells for Sanctuary. Frollo orders his soldiers to break down the door. Phoebus breaks free from his cage and rallies the citizens of Paris and the French army to attack and free Clopin, Djali, and the other gypsies from their cages. They tried to hold the citizens of Paris and French soldiers back but were defeated. After Frollo's death, when the gargoyle he was standing on suddenly comes alive and it roars thunderously at him and breaks off causing the latter falls to his death, they surrendered and were likely arrested by the French army and or executed for their crimes or most likely have reformed and rejoined. 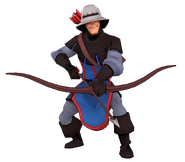