Platforming
Frozen: Olaf's Quest is a video game based off the 2013 Disney animated feature Frozen, and starring the film's secondary tritagonist Olaf the Snowman voiced by Josh Gad. Reviews were largely mixed.[2]

In this humorous epilogue to the motion picture, Disney Frozen: Olaf’s Quest hands center spotlight to Olaf, the outgoing, innocent and comically carefree snowman from Disney’s epic comedy adventure. It pairs tightly tuned platforming action with light puzzle-solving elements across 60 imaginative levels, complete with hidden collectibles, side challenges and unlockable customization items. Frozen’s gameplay mechanics are informed by Olaf’s unique design, allowing him to use his own frigid yet fluid form to help him out of slippery situations. The game is designed with challenges appropriate for young or new gamers.[1][3]

Frozen: Olaf's Quest features characters based from the Disney animated film Frozen. It was released on November 19, 2013 for Nintendo DS and Nintendo 3DS.[1] Developed by 1st Playable Productions and published by GameMill Entertainment,[4] it takes place after the events of the film. Mechanics of the gameplay are based on Olaf's unique character qualities, such as ability to slip around levels.[3] Several aspects of the game are influenced by the humor of the character and the film.[3][5]

Orla Madden of Nintendo Life gave the game a mixed review of 5/10.[6] While a fan of the film, Madden criticized the lack of presentation, noting a complete lack of dialogue or storyline.[6] Other criticisms included the repetitive gameplay, lack of humor, and a lack of appearances of other characters from the film such as Anna and Elsa. While saying the game would be fun for younger players, he asserted that older gamers would find little to enjoy in the game.[6] 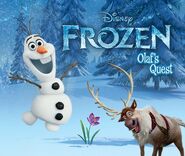 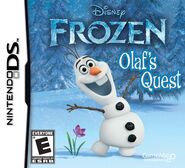