“Love is a force of nature.”
―Tagline

Frozen is a stage musical adaptation of Disney's 2013 animated feature of the same name.

The musical was announced on January 13, 2014 by Walt Disney Company chairman, Bob Iger, and Disney Theatrical Productions.[2] The show held its pre-Broadway engagement at the Buell Theatre at the Denver Center for the Performing Arts from August 17 to October 1, 2017. It began previews on Broadway at the St. James Theatre on February 22, 2018 and officially opened on March 22, 2018.[1][3]

On May 14, 2020, it was announced that when Broadway reopens from the COVID-19 pandemic, Frozen would not return to the St. James Theatre, having had its final performance on March 11. After 841 performances, Thomas Schumacher, head of Disney Theatrical Productions, stated that it would no longer be economically sustainable for the company to run 3 shows simultaneously on Broadway amidst recent economic challenges. This does not affect the current North American tour or any other current or upcoming produnctions both domestic and internationally.[4]

The story follows the tale of two estranged sisters, Princess Anna and Princess Elsa, who was born with the power of ice and snow. After losing control of her abilities, Elsa inadvertently sets off an eternal winter that consumes her kingdom. It is then up to Anna to traverse the snowy mountains to find her sister and return her home.

It was confirmed on July 23, 2015, that the songwriting team from the original film, Robert Lopez and Kristen Anderson-Lopez, will return to write new songs for the production. Over a dozen new songs had been conceptualized by the show's first run in Denver. Co-director/screenwriter Jennifer Lee also returned to write the book.[5]

The production team saw the show as an opportunity to delve deeper into the characters, their backstories and their motivations. Because of this, a few of the film's action scenes were omitted, with the time being used to focus on the struggle of the characters. The show runs about twenty minutes longer than the length of the film.[3]

Variations from the 2013 film

A narrator, one of the "hidden folk", introduces Princess Elsa of Arendelle and her playful younger sister, Anna ("Vuelie", "Anna and Elsa"). During one night after bedtime, Elsa and Anna build Olaf ("A Little Bit of You") and Elsa creates snow in their room, exciting Anna so much that she jumps from one bed to another just as Elsa accidentally injures Anna with her cryokinetic magic. Their parents, the King and Queen, call for the aid of the colony of hidden folk, led by Grand Pabbie. He heals Anna but alters her memories to remove traces of Elsa’s magic. Elsa asks for Grand Pabbie to remove her magic, but Grand Pabbie says it's a part of her, and then gives her a vision of her future, frightening Elsa, who believes that fear will cause death. The King and Queen isolate the sisters within the castle. Elsa shuts out Anna, even as Anna asks for her to come out ("Do You Want to Build a Snowman"). Elsa's fear of her powers grows as the King and Queen are powerless to help. Both parents die at sea during a storm while both princesses are still young.

Ten years later, when Elsa turns twenty-one, she is to be crowned queen of Arendelle. Anna is excited for the castle's gates to open ("For the First Time in Forever"), and bumps into the dashing Prince Hans of the Southern Isles. Both fall into ice harvester Kristoff's sled. Hans then reflects on his trip ("Hans of the Southern Isles"). Elsa is terrified that the kingdom's citizens might find out about her powers and fear her while wishing to be able to reconnect with Anna ("Dangerous to Dream"). Elsa’s coronation goes smoothly, and Elsa relaxes a bit, initiating her first contact in years with Anna. Both gleefully enjoy during the coronation together at first, with Anna talking the Duke of Weselton out of dancing with the newly crowned Queen. However, Elsa then leaves Anna after her younger sister asks about keeping the gates open. Anna then finds Hans and falls in love with Hans ("Love is an Open Door"), who then proposes to her on the spot and both share a kiss.

The newly engaged couple asks for Elsa's blessing, who objects based on the fact both have only known each other for a day. After intense questioning from Anna about shutting her out from her life, Elsa accidentally unleashing her powers before the court. The Duke brands her a monster. Elsa flees the castle to the North Mountain. In the process, however, her suppressed magic engulfs Arendelle in an eternal winter. Anna then goes out to search for Elsa, leaving Hans in charge during her absence.

Up in the mountain, Kristoff and his reindeer Sven ("Reindeers are Better than People") relax while an ill-equipped Anna (still in her coronation dress) encounters them. Kristoff gives her a spare set of winter clothes. Anna then changes into the warmer clothing, leaving her coronation dress behind in the snow. Both Kristoff and Anna disagree about love while crossing a bridge ("Who Do You Know About Love"), with Anna saving Kristoff from falling off the bridge. Anna and Kristoff then encounter a newly created Olaf, who offers to guide them to where Elsa is, and sings about his love for summer ("In Summer").

Meanwhile, in Arendelle, a soldier brings back Anna's dress from the mountain, which causes Hans to fear for Anna's safety, and then assembles a search party ("Hans of the Southern Isles (Reprise)"), with the Duke sending two of his men with different orders to kill Elsa. On the North Mountain, Elsa reflects, decides to throw away her cloak, builds an ice castle with her powers, and then transforms her coronation dress into her own ice dress ("Let It Go").

Oaken, of Wandering Oaken's Trading Post, greets the audience ("Hygge"). Anna, Kristoff, and Olaf arrive at the trading post, with Anna initially enjoying the sauna with its many other patrons. However, Kristoff convinces Oaken and his patrons to aid their journey, which enables them to get provisions and Anna gets her winter dress.

Reaching the ice palace, Anna meets Elsa, but when she reveals what has become of Arendelle, Elsa becomes angry and frustrated, saying that she can't fix it, and accidentally freezes Anna's heart ("For the First Time in Forever (Reprise)"). Elsa then kicks Anna, Kristoff, and Olaf off while wondering what to do ("Dangerous to Dream (Reprise)"). Anna's hair begins turning white, so Kristoff takes her to meet the hidden folk, his adoptive family, who recognize Anna as the princess and think she's Kristoff's fiancee ("Fixer Upper"). Grand Pabbie reveals that Anna will freeze solid unless "an act of true love" reverses the spell. Kristoff races Anna back home so Hans can give her true love's kiss, at the sacrifice of his own hidden love for her ("Kristoff Lullaby").

Back in the ice castle, Elsa wonders if she's a monster and wonders how can she end the storm, even wondering whether the storm would end or grow worse if she were dead ("Monster"). She resolves she must stay alive to end the storm, but Hans and his men reach Elsa's palace, capturing Elsa. Back at the castle, Anna is delivered to Hans, but rather than kissing her, he instead reveals that he has actually been plotting to seize the throne of Arendelle by eliminating both sisters ("Hans of the Southern Isles (Reprise 2)"). Hans locks Anna in a room to die, as Anna reflects on her mistakes while still holding on to the idea of love ("True Love"). Olaf frees Anna, and they venture into the blizzard outside to meet Kristoff, whom Olaf reveals is in love with her.

Outside the castle, Hans publicly charges Elsa with treason and sentences her to death. Elsa escapes her chains and flees outside as a blizzard grows ("Colder by the Minute"). Kristoff and Anna struggle to find each other. Hans then confronts Elsa, claiming that she killed Anna, causing Elsa to break down. Anna finally finds Kristoff but spots Hans about to kill Elsa; she leaps in the way and freezes solid, stopping Hans. Devastated, Elsa mourns over her sister, who thaws out, her heroism constituting "an act of true love". Realizing that her magic is controlled by love, Elsa ends the winter ("Vueille (Love Thaws)"). Hans gets punched by Anna, and Anna and Kristoff become a couple. Elsa and Anna reunite and reconnect without fear for the first time, as the departed King and Queen, young Elsa and young Anna appear in the background, signaling the healing of the sisters' painful past ("Resolution"). 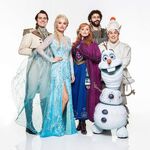 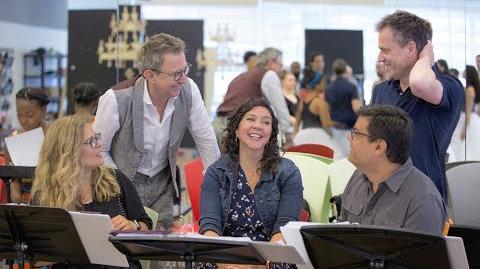 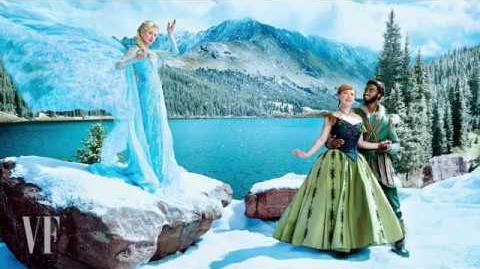 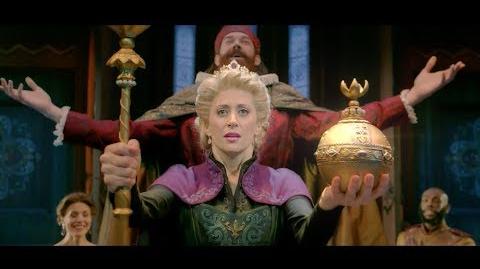