Why was Elsa born with magical powers? The answer is calling her and threatening her kingdom. Together with Anna, Kristoff, Olaf and Sven, she'll set out on a dangerous but remarkable journey.

Development on a theatrical Frozen sequel was officially announced at a Disney Shareholder meeting,[6] alongside being confirmed by Jennifer Lee on her Twitter account.[7]

Co-directors of the original film, Jennifer Lee and Chris Buck, as well as producer, Peter Del Vecho, are set to helm the project.[4]

On April 25, 2017, the official release date for the Frozen sequel was announced by Disney.[8] On September 28, Josh Gad and Disney announced on social media that recording for the film had officially begun.[9]

In 2018, Jennifer Lee was the appointed replacement for John Lasseter following his discharge from The Walt Disney Company. With her attention now focused on several facets of the studio, writer Allison Schroeder was brought on to cowrite the script for Frozen 2. On November 1, it was announced that the Frozen sequel had been pushed up a few days from November 27, 2019 to November 22, 2019.[1] On February 13, 2019, the film was retitled as Frozen II.

As part of the production process, the filmmakers took part in a four hour psychological personality test, assuming the roles of the characters and answering questions posed by an actual psychologist. In doing so, they discovered that Anna was a "fairy tale" character, optimistic and human, while Elsa was a "mythic" character, with the weight of the world on her shoulders and special powers. The film's visual developers worked on special finishing touches to the characters' outfits, including lining inside the fabric of every character's clothes.[10]

Advance ticket sales for Frozen II set a first day record for an animated film for both Fandango and Atom Tickets. The film outpaced sales of Toy Story 4 to set the new record. Based on early sales, the film was predicted to open with at least $100 million over its opening weekend, with more optimistic predictions setting it at $125 million.[11] 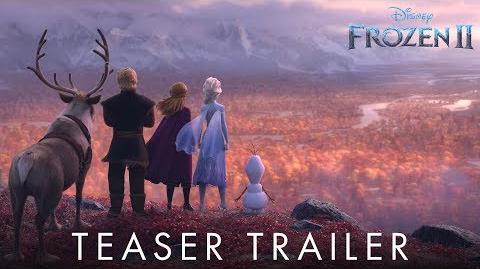 Kristen Bell - The Next Right Thing (From "Frozen 2 First Listen")

Josh Gad - When I Am Older (From "Frozen 2 First Listen")