Bad
Francis Lurman, also known as Frugal Lucre,[1] is a character in the series Kim Possible.

He is a geeky Smarty Mart employee who threatened to infect the Internet with a virus scanned via the barcode of a can of expired Vienna sausages, unless everyone in the world agreed to pay him a dollar each, thus earning him over six billion dollars. He used a fake beard and a pseudo-European accent to disguise himself for his worldwide broadcasts and kept a wading pool of "deadly" snapping turtles (in lieu of a moat filled with more dangerous animals like piranha). Unlike other villains, Lucre didn't use henchmen or a lair, most likely due to his cheap nature.

After his capture, Lucre appeared as Drakken's cell mate in "Car Alarm" and "The Big Job". As of Drakken's escape in "Mad Dogs and Aliens", he now shares a cell with Motor Ed. He is incessantly chatty, and annoyed Drakken to no end (ironically, Ed was just as annoying to Lucre as Lucre was to Drakken). He is eventually released during the events of "Mentor of Our Discontent", but was captured again at the end of the episode.

Of Kim's enemies, Lucre is an odd mix of excessive megalomaniac and small scale, but is surprisingly competent. He is preponderant and obnoxious to Dr. Drakken and most others have a difficult time interacting with him.

His personality's main quirk lies in being patient enough to get more out of less, though this backfires with regularity. He sees himself as a supervillain who does the same with less, though he is often sneered at by villainous colleagues.

Frugal Lucre is a young, brunette haired and an athletic man. His exact age remains unknown, though given his technical skills it is likely he has graduated from college.

While not particularly skilled as a villain his first appearance reveal he had computer skills the near-equal of Wade's and was able to crash even his system. He also took advantage of the fact he work at Smarty Mart to send his messages through them to avoid detection before he was busted. Unlike Wade, he's actually proficient in actual hand-to-hand, but his skills are minimal and rely on taking advantage of his surroundings.

Frugal Lucre's rivalry with Kim is hardly a blip on the radar in comparison to the rivalry of Shego or Bonnie. For her, Frugal Lucre is a pathetic villain and hardly a proper threat. Kim's interactions with him are limited to chasing him down and pointing out how he's not a supervillain but a "bargain bad guy". If anything, Kim's main issue with Lucre is that his schemes can disrupt her usual activities by shutting down economic electronics such as cash registers at Club Banana.

He was cellmates with Dr. Drakken. for three episodes at the beginning of Season 4. Drakken strongly disliked him because he would not stop talking. He even cheers of being able to escape from him while imprisoned, and is horrified when Lucre finds his lair. The two do reconcile, however, as the two go on their own scheme, but the exact nature of their relationship is unknown after this point, other than that Frugal Lucre was present to cheer Drakken after the events of "Graduation" (and the only villain present to do so). 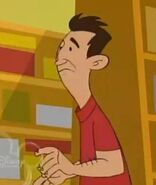 Retrieved from "https://disney.fandom.com/wiki/Frugal_Lucre?oldid=3310015"
Community content is available under CC-BY-SA unless otherwise noted.