Start a Wiki
Fryborg is a giant robot from the five minute TV show, The Bite-Sized Adventures of Sam Sandwich. He intends on making kids eat fried foods instead of eating healthy foods. He is voiced by Richard Steven Horvitz.

Fryborg, contrary to his name, appears to be entirely robotic. He speaks with a sterotypical robot voice and mannerisms, and is the largest of the antagonists. His arms can change into a number of things to commit crime and attack the goodies with. Fryborg, true to his name, likes dishing out deep fried foods. Both of Fryborg's appearances have him short-circuiting. Fryborg can also shapeshift into a truck. He appears to have missing teeth. These combined with his wide eyes, give him a dopey, non-threatening appearance. 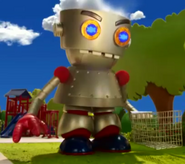 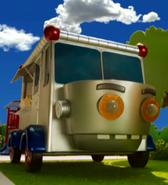 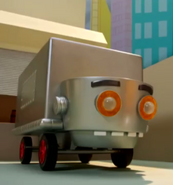 Add a photo to this gallery
Retrieved from "https://disney.fandom.com/wiki/Fryborg?oldid=3335092"
Community content is available under CC-BY-SA unless otherwise noted.