Active
Fulton Reed is a character in the Mighty Ducks Trilogy, portrayed by Elden Henson.

He is initially an outsider in The Mighty Ducks and first meets the team when the Hawks corner the Ducks in an alleyway and threaten them. He beats up the 3 players from the Hawks and leaves after the Ducks thank him. He continues to sit in the stands and watch the games as the team continues to lose. Later, he is recruited by Bombay when Fulton accidentally hits a slapshot at the window of Bombay's van. Instead of being upset about the window, Bombay asks Fulton to perform the powerful slapshot once more. Despite Fulton's protests about the shot being inaccurate (1 out of 5 are successful) and his excuse that he cannot ice skate, Bombay pushes him to join District 5 Ducks. Later he is taken back by Dean Portman's ruthless behavior on the ice in D2 and got into verbal argument with him, complete with pushing and shoving before Coach Bombay stops them and the other members. However, later on, he quickly bonds with Portman over talking to pretty girls and a love of heavy metal music. He is close friends with Dean Portman and became known as the "Bash Brothers". The two enforcers often have fun together just bashing players down during matches to make life easier for the Ducks as well as some fun entertainment. During the rematch against Iceland, he and Portman are so thoroughly impressed of Kenny Wu after he beats up the goaltender upon scoring. So much so that both Fulton and Dean immediately make Kenny as a fellow "Bash Brother". Reed is shy and reserved, but shows his loyalty by standing up for the Ducks when the Hawks bully them. He is especially fiercely loyal to Charlie Conway. Like Charlie, he has trouble adapting to Coach Orion at the outset of D3. Reed is the other half of the "Bash Brothers" and the only player on the team to have his or her first name on the back of the jersey. His jersey number he wears is 44 and is often rotated between forward or a powerhouse enforcer positions especially when paired with Portman.

Fulton's size and strength are huge assets to the Ducks offense and defense. His strength not only poses a threat when playing defense, but allows him amazing velocity and height on his slapshot, which often sends opposing players cowering out of the way of it. Fulton's physical presence is often the Duck's only line of physical defense. For the third film, he's shown to be one of the only players to offer any sort of physical play against Varsity, until he is joined by Dean Portman and Greg Goldberg.

While a tremendous physical player, Fulton does lack skill in his skating, often shown to be slower and more off-balance than his teammates. His skating is at its weakest in the first film, but is much improved in the second and third, albeit still not quite on par with his teammates.

Elden Henson was only 13 when The Mighty Ducks was filmed, and was considerably tall for his age. He was already taller than co-star Emilio Estevez, who is 5'7". Because of his then height, he was expected to be much taller for the sequels, but would not grow much more as he got older, standing at approximately 5'10" by the third film.

For the third film, different camera angles would have to be used to make Elden look as tall as co-star Joshua Jackson (Charlie), as he was 6'0" by the time of the third film.

Henson does considerably more of his own hockey playing than his co-stars in the second and third film. He was only replaced by a stunt double when his character was taking big hits or if it was a second unit shot. 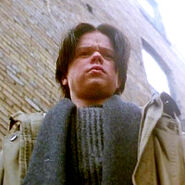 Add a photo to this gallery
Retrieved from "https://disney.fandom.com/wiki/Fulton_Reed?oldid=4499215"
Community content is available under CC-BY-SA unless otherwise noted.