Having to eat too much sweets

Active
Fun Bun and Puddles are minor characters in Disney's 2018 animated feature film, Ralph Breaks the Internet. They are the bunny and kitten co-stars of Pancake Milkshake, a mobile app game where one has to serve the duo specific foods before the clock runs out.

In the film, a Pancake Milkshake package with Fun Bun and Puddles' image is examined by Wreck-It Ralph for an unboxing video on BuzzzTube; and upon opening it, he is met with bees to tie in with the video's bee pun.

In a mid-credits scene, a toddler named Mo is being driven home after seeing the film Ralph Breaks the Internet and laments that a part from the trailer was not shown, so her mother suggests she play Pancake Milkshake on her tablet where Fun Bun and Puddles are. The duo is supplied their treats — pancakes for Fun Bun and milkshakes for Puddles — when suddenly, Ralph and Vanellope enter the diner to the bewilderment of the animals and Mo. Amused by the game's mechanics, Ralph opts to play with the objective. Ralph's servings are mild for the duo before Vanellope uncovers a stash of pancakes to serve Fun Bun, bringing dread to him and Puddles. After Ralph gives several consecutive helpings of pancakes, Fun Bun swells to morbid obesity; Vanellope urges Ralph to let Puddles have a treat, but Ralph encourages the overfed rabbit one more plate of pancakes. Fun Bun weakly accepts the serving, though once he gulps down the meal, he begins to rumble. Puddles ducks down for cover while Fun Bun explodes on-screen, frightening Mo to a scream.

The duo, or rather aggressive clones of them, are primary enemies in the virtual attraction Ralph Breaks VR. Controlled by the antagonistic security system B.E.V., these copies are found inside Pancake Milkshake Diner, where they assault Ralph and take him hostage while launching the players with confectionery projectiles.[2]

The opening screen of their game 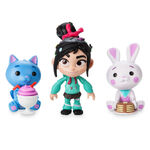 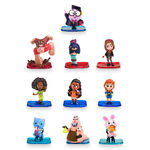 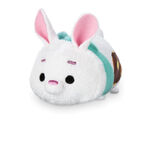 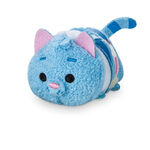 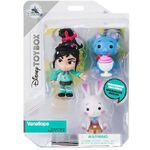 The duo in Ralph Breaks VR

The mobile app game of Pancake Milkshake on iMessage