Being played with, being stuck in Poultry Palace (currently)

Being stuck in Poultry Palace (formerly)

“Do you like honey mustard sauce? Yeah, you do”
―Fun Meal Buzz Lightyear[src]

As his name implies, he's a smaller version of Buzz Lightyear, with Woody estimating that he was about three inches tall during an argument with Rex.

Fun Meal Buzz is first seen in the display case with Fun Meal Emperor Zurg, talking about being played with, but Fun Meal Zurg chooses to rather stay in the case. Spotting Bonnie's Buzz Lightyear toy in her backpack as she is entering the restaurant's ball pit, Fun Meal Buzz then exits the case, ambushes his larger counterpart and replaces him with himself in the ball pit. Bonnie takes Fun Meal Buzz and Rex home. When they get Bonnie's room, Fun Meal Buzz gets Rex to convince Bonnie's toys that the plastic in the ball pit has made him shrink, but the toys know this is not the real Buzz (except a gullible Rex). As Fun Meal Buzz skates around the room, eagerly awaiting playtime, Woody tries talking to him but the little toy snatches his hat and slaps Hamm in the rear before he is tackled. The toys then tie Fun Meal Buzz to a glue bottle and devise a plan to rescue the real Buzz, who suddenly shows up in Bonnie's room, having managed to escape Poultry Palace via the Drive-Thru. Afterwards, the real Buzz takes his smaller counterpart back to the restaurant, where Mini-Buzz joins the support group for Discarded Fun Meal toys with Bonnie's Buzz as his "sponsor." 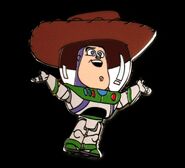