2
Philip "Fyvush" Finkel was an American actor and voice actor best known as a star of Yiddish theater and for his role as lawyer Douglas Wambaugh on the television series Picket Fences, for which he earned an Emmy Award in 1994. He was also known for his portrayal of Harvey Lipschultz, a crotchety U.S. history teacher, on the TV series Boston Public.

For Disney, he voiced the Hearing Aid in the film, The Brave Little Toaster Goes to Mars and played Murray Chotiner in Nixon and a vendor in the 1986 Touchstone Pictures film, Off Beat. 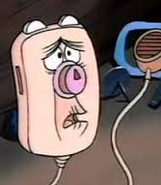 Hearing Aid
(The Brave Little Toaster Goes to Mars)
Add a photo to this gallery
Retrieved from "https://disney.fandom.com/wiki/Fyvush_Finkel?oldid=3954219"
Community content is available under CC-BY-SA unless otherwise noted.