Small robot with large shoulders and a red glowing head

To get rid of the plant and help AUTO (failed)

Thrown out of the bridge, and falls to his death when he hits the ground hard, next to the swimming pool
GO-4 (GO-FR) is the secondary antagonist of the 2008 Disney/Pixar animated film, WALL-E.

He is quite small and easily recognizable due to the red police light atop his body. GO-4 is equipped with two salute-ready arms and an anti-gravity stasis beam. For communication, he had various beeps and other sounds, similar to R2-D2 from Star Wars. GO-4 units also can deliver coffee to superiors.

GO-4 used his personal elevator system to move fast around the Axiom. The entrances/exits of the elevator were usually at Steward Kiosks, the places where SECUR-T (Steward bots) were waiting inactive until they were needed. The elevator also granted GO-4 an access to the captain's quarter.

GO-4 serves aboard the Axiom as the Captain B. McCrea's first mate, and helped Auto in his attempt to carry out Directive A-113. He was accidentally destroyed when he attempted to assist AUTO in taking down Captain B. McCrea and was kicked and sent flying through a window and crashing down near one of the swimming pools in the Lido Deck. 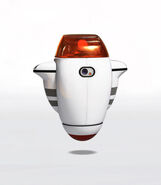 GO-4 smashes right beside the pool.
Add a photo to this gallery

Retrieved from "https://disney.fandom.com/wiki/GO-4?oldid=3555571"
Community content is available under CC-BY-SA unless otherwise noted.