His friends taking risks or putting themselves in danger, Prince Alonso's playboy ways, being disrespected, lizards

"This is so not how I wanted my first day to go."

Captain Gabriel "Gabe" Núñez is a character who appears in the Disney Channel animated series, Elena of Avalor. He is Elena's friend and rising star of the Royal Guard.

Gabe is a very enthusiastic, confident, and reasonable person. Gabe is also very protective of Elena and Isabel, because of this, he does not like Elena's take charge approach mostly for the sake of his job. Gabe is very professional and takes his job very seriously.

Eighteen-year-old[3] Gabe makes his debut in "First Day of Rule" when Elena leaves Avalor Castle to visit the city. He formally introduces himself to her when she gets out of the carriage. When Princess Isabel wants to stay behind to draw the boats some more, Elena tells Gabe to watch her. Gabe is asking Isabel what it was like when her sister faced Shuriki when Isabel spots some purple dogs boarding a ship. When the pair investigates, the dogs are revealed to be Noblins who take them prisoner. When Elena appears and frees them, Gabe tells her to take her sister and go but Elena refuses. Elena talks to the Noblins and learns that they were taking the ships to get home after Shuriki imprisoned them.

In "The Curse of El Guapo," Gabe was in the running to be Captain of the Royal Guard, when his boss retired. Up against three other boys he goes on to compete against them in an obstacle course. Gabe took a cursed sword that made him act arrogant to help him win. Elena helps him realize that its himself that makes a good guard not the weapon.  Then during the final obstacle his fellow guard fell so Gabe turned around to help him finish the obstacle. After the obstacle final was over Princess Elena promoted him to be the new Captain of the Royal Guard. 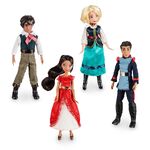 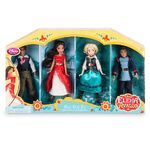 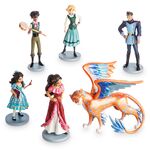 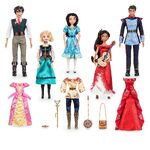 Retrieved from "https://disney.fandom.com/wiki/Gabe?oldid=3947355"
Community content is available under CC-BY-SA unless otherwise noted.