Forced to do work
Gabriella Carlita Espinosa is a supporting character from the Disney Channel animated series Big City Greens. She is the love interest, later girlfriend, and friend of Cricket Green who shares some of his mischievous traits.

Gabriella Espinosa is a very down to earth girl, but displays some spunk to her. Like most children, she wants to have fun, but does not put up with ridiculous things that put her off. She is relatively friendly, especially to Cricket who she gladly "goes out" with. While she does not consider herself romantic, she likes Cricket enough to at least consider being close to him. She has revealed that she can be a troublemaker just like him, having gotten onto the intercom at the Community Center just to say "dookie".

Gabriella is a girl roughly Cricket's age who has pink skin and purple hair done up in a long ponytail held by a dark yellow knot. She is slightly taller than Cricket, but maintains the same body shape. She typically wears a greyish-green shirt and dark grey pants along with tall socks and red sneakers.

In "Valentine's Dance", she wore a light blue dress and matching bow on top of her head with black shoes. 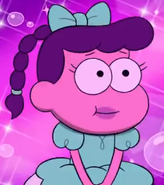