To communicate from a long distance

The Galactic Cell Phone (or Communicator according to Disney Magic Kingdoms) is a special device seen in the Lilo & Stitch franchise.

It is first seen in use by Pleakley. This red, oval-shaped cordless device is used for long-distance communication. The device seems to be waterproof, can contact any vessel in the Galactic fleet, and features a monitor for viewing the individual on the other end, similar to the videophone on Gantu's ship in Leroy & Stitch.

The device has similarities to present-day smartphones, including a touchscreen and video chat capabilities. However, in stark contrast to today's cell phones, an antenna has to be pulled out from the device so it can be used, much like Earth-based cell phones of the time the original Lilo & Stitch film is set (the early 2000s). Today's cell phones embed the antenna completely inside the casing. It also has a considerably thick bezel and casing, which modern devices' screens have greatly reduced over the years. The only things that the fictional device has that today's phones have not is having its camera hidden behind the screen (and even then, smartphone prototypes with behind-screen front-facing cameras have been developed as of 2019), the ability to communicate over intergalactic distances from nearly anywhere, and a round screen and body (although the short-lived Microsoft Kin ONE released in 2010 did have a squircle body, but not a round screen). 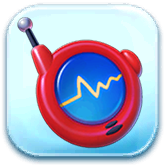 Retrieved from "https://disney.fandom.com/wiki/Galactic_Cell_Phone?oldid=3802381"
Community content is available under CC-BY-SA unless otherwise noted.