Tamed by Elsa, and makes peace with the Northuldra and Arendellians
Gale is a character in the Disney animated feature film, Frozen II. It is the elemental spirit of wind that dwells within the Enchanted Forest.

Gale is one of four elemental spirits in the forest, the others being the fire spirit Bruni, the Earth Giants, and the water spirit the Nokk.[1] Gale—who gets its name from Olaf—is identified by leaves and other debris that sway through the air. When not in this neutral state, Gale can transform into a powerful tornado or summon extreme winds. Gale and the other spirits were once on peaceful terms with the Northuldra tribe, whom made their home in the Enchanted Forest. Gale was particularly fond of a young girl named Iduna. The two would often play together in the forest. Iduna also had a special call that would summon Gale to her side.

Thirty-four years in the past, a war broke out between the Northuldra and neighboring Arendellians. The violence angered the spirits, including Gale, who turned against humanity. In the midst of the chaos, a young prince named Agnarr was injured and left unconscious. He was recovered by Iduna, who called for Gale’s assistance in rescuing him. However, the damage between the spirits and humans was still present. A curse was unleashed amongst the Enchanted Forest, which was encapsulated in an impenetrable mist. Only by rectifying the source of the conflict-a dam built by King Runeard-would the curse be broken.

Gale proved to be one of the more difficult characters to visualize for the animators, as wind does not have a physicality to it. Early visual development portrayed Gale as an ethereal being. Eventually, it was decided that Gale would interact with leaves, sticks, and debris to identify itself. New software was created to make this possible, titled "Swoop". Swoop allowed animators to create a path that Gale would travel along, which would then be used to add leaves and other objects to identify the character's presence.[2]

Gale is the first elemental spirit encountered by Elsa and the others in the group traveling from Arendelle into the Enchanted Forest. It sweeps up Olaf in a tornado, badly scaring him, and soon has the others in its grip as well. Elsa, however, is able to tame it and it ends up becoming quite playful, appearing as a swirl of leaves. It is later present during Anna's coronation at the end of the film and amuses her with its wind she gives Gale a letter to deliver to Elsa in the Enchanted Forest. 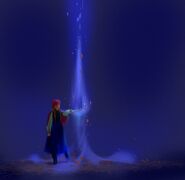 Concept art, depicting Gale (with Anna) as an ethereal being.
Add a photo to this gallery

Retrieved from "https://disney.fandom.com/wiki/Gale?oldid=3905640"
Community content is available under CC-BY-SA unless otherwise noted.