Galgheita Rudolph is a fictional character in the comic book W.I.T.C.H. and the animated series.

She is a Meridianite that brought Elyon Brown to Earth.

Galgheita worked with Alborn and Miriadel to abduct Elyon and they used the Seal of Phobos together to travel to Earth to protect her from her brother, Phobos. As the Math teacher at Sheffield she offered Will extra coaching after she dozed off in class. Irma Lair deduced that Will's faintness in Math class was similar to how she felt around the Seal of Phobos, so she and Hay Lin investigated her house.

When she returned unexpectedly they saw her without her human disguise, causing Irma to faint. Both girls were captured but when Will arrived for tutoring, Irma managed to warn her. Although Galgheita tried to reason with them, the girls were angry and afraid, chasing her the attic of her house where she fled through a portal which they closed. Shortly afterwards, when the Guardians went to Metamoor to rescue Taranee from Cedric, Galgheita helped them avoid his soldiers by taking them through shadows into what she describes as "this infinite city's basement." She forgives them for their earlier reaction, warning them that time passes faster here than on Earth. When Vathek breaks into the basement, she retreats.

Galgheita returns to Earth, claiming she had been on vacation, and resumes her job at Sheffield. She acts as an intermediary between the Guardians and Caleb's rebels, relaying warnings of events in Metamoor such as Vathek's attempted invasion of Earth and Elyon's impending coronation. She also helps others fleeing Phobos to hide on Earth.

By the end of the Nerissa arc, Galgheita has arranged to retire from Sheffield and Cornelia opens a portal for her to Kandrakar so she can return to Metamoor with Caleb. Elyon welcomes her warmly and asks her to be her teacher.

Galgheita stole Elyon from Phobos's castle as a baby, and used the Seal of Phobos to cross the Veil to earth. There she found Miriadel and Alborn to take care of Elyon, and then she took a job as a teacher at Sheffield Institute, where the Guardians knew her as Ms. Rudolph. When Elyon returned to Meridian, Galgheita helped the Guardians in their search for Elyon. 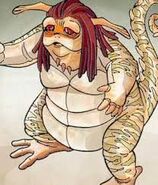