Serving the Empire, being a false symbol of hope, taunting Rebels

Rebels, being tricked, being exposed

“This is senator-in-exile Gall Trayvis. I bring more news that the Empire doesn't want you to hear.”
―Gall Trayvis, in an unsanctioned HoloNet News transmission

Senator Gall Trayvis is a character who appears in the Disney XD animated series Star Wars Rebels. He is a member of the Imperial Senate. He posed as a dissenter of the Galactic Empire and a voice of truth. However, all an act and was in fact an Imperial agent who tricked Rebels into coming out of hiding so they could be identified and captured.

Senator Trayvis wouldn't make any physical appearances for about two episodes, only by audio while broadcasting hacked transmissions in "Rise of the Old Masters" and "Empire Day". In his vocal debut, he spoke of the survival of Jedi Master Luminara Unduli to lead the Rebels into a trap.

Trayvis made his first physical appearance in "Vision of Hope", when the Rebels came to warn him about a trap set by Agent Kallus. He urged the Rebels to surrender but the Rebels broke through the Imperial battle formations and headed into the sewers. The Rebels split up with Trayvis going with Hera and Ezra. When he asked how many others are in their cell he was shocked to learn from Ezra that it was just them. When they got to a fan, Hera handed Trayvis a blaster and told him to watch their backs. However, Trayvis pointed the blaster at them and revealed himself to be an Imperial Spy and his voice of truth speeches were just an act to trick Rebels into coming out of hiding and get identified by the Imperialists. He revealed the reason other Rebel cells haven't heard this was because no arrests were made. The unfortunate Rebels who walked into his trap were then watched or killed by the Imperial government after meeting with him. When Ezra mentioned his parents, Trayvis told him they were fools for opposing the Empire and he joined the Empire so he could survive. When he tried to shoot Hera he discovered the blaster wasn't charged and got knocked out by her, realizing too late that she had suspected his Imperialist loyalties all along because of his recent actions. When he came to, he found the Rebels on the other side of the fan with Ezra glaring at him out of anger over his Imperialist allegiance and disgust that it was for such a cowardly reason. 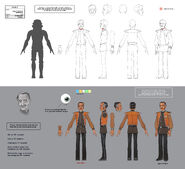