A list of techniques, mechanics, and special attacks that appear within the Kingdom Hearts series.

In Kingdom Hearts: Chain of Memories, gameplay relies on a card system. Players organize their cards into a deck, similar to a command deck. However, command decks allow the player to attack constantly although with card decks, the player is unable to attack once his cards run out. If such a thing happens, the player must stand still for a few moments in order to reload his deck. Cards are divided into attack cards, magic cards, item cards and friend cards, which are found during battle rather than stocked into a deck beforehand. Three of these cards can be used together to form more powerful sleights at the cost of losing one of the three cards for the remainder of the battle. Players can also use enemy cards to grant specific abilities for a set period of time, although these can only be used once per battle.

Other types of cards include map cards, which are required to unlock new rooms, and world cards. In terms of plot, cards are crafted out of memories in Castle Oblivion.

In Kingdom Hearts 358/2 Days, a panel system is implemented, where abilities, equipment, weapons, and magic must be installed into a grid that can be expanded by obtaining slot releasers. Magic is more limited compared to previous games as, depending on what panels the player is using, each spell has a certain number of uses available to use during each mission. Once a spell runs out, there is no way of recovering uses unless the player uses items.

Drive Forms are special forms that appear in Kingdom Hearts II. Through the magic of the clothes that Flora, Fauna, and Merryweather gave him at the Mysterious Tower, Sora is able to temporarily take on a new appearance that grants him a separate set of abilities by merging with his allies. 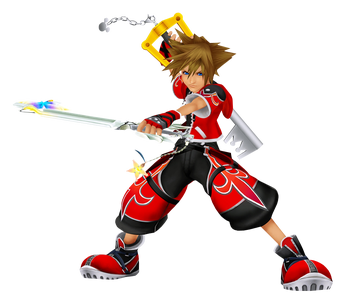 Valor Form specializes in physical combat. By merging with Goofy, Sora is fights with more physical attacks, including the use of two Keyblades. However, Valor Form disables the use of magic. 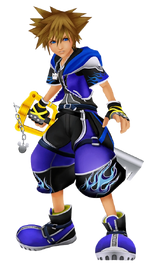 Wisdom Form specializes in magic. By merging with Donald, Sora has greater magic attacks, and fights by shooting projectiles from the Keyblade. However, there are no head-on attacks in Wisdom Form, instead allowing for Sora to shoot from a distance and hover slightly from the ground, allowing for a faster movement. 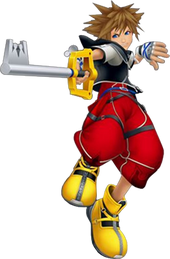 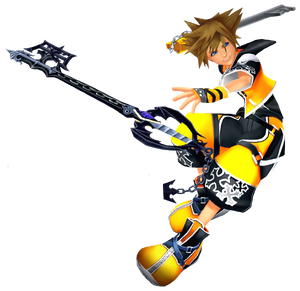 Master Form is capable of both physical and magical combat, making it more powerful than Valor and Wisdom form. It merges with both Donald and Goofy, and allows for him to use one Keyblade while having another circling around him. It is the combination of both Valor and Wisdom Forms. 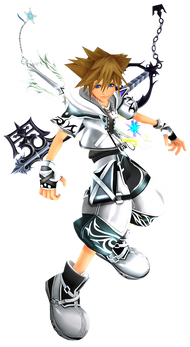 Final Form is the ultimate form, excelling in both magic and physical attacks. It uses both of Sora's party members, and is gained upon meeting his missing half, allowing him to tap further into his own potential. Two Keyblades float behind Sora, and he hovers above the ground. Sora is able to glide in Final Form, as well. 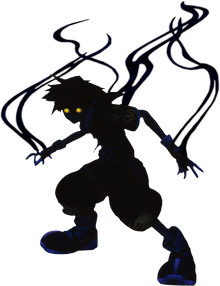 Anti Form uses fast attacks and long combos, but lacks the ability to cast spells, shield, recover HP, or use Reaction Commands. An algorithm in the game causes Sora to trigger Anti Form while switching to any of the other forms. It is a manifestation of the time Sora became a Heartless, and is largely based on dark attacks. However, Sora cannot use the Keyblade while in Anti Form. 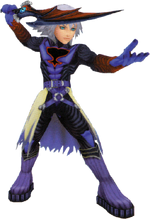 Dark Mode is a form exclusive to Riku throughout the series. Riku initially receives the ability to enter Dark Mode from Maleficent in Kingdom Hearts. In this form, Riku embraces the power of Darkness, giving him a substantial advantage in battle as he has increased speed, damage and powerful abilities. Although he is often fought against in this form, in Kingdom Hearts: Chain of Memories Reverse/Rebirth, the player has the opportunity to play as Riku in Dark Mode.

Formchange is a mechanic exclusive to Kingdom Hearts III. When Sora equips one of the game's Keyblades, after receiving enough damage, he can change the abilities or form of the Keyblade into a different weapon or weapons. Similar to the Drive Forms, Formchange alters Sora's outfits in tandem with the attribute his Keyblade is.

Second Form swaps the palette and abilities of Sora's outfit with his outfit from Kingdom Hearts II. It is triggered by the Kingdom Key. It comes in sub-forms depending on the Keyblade: Second Form S (by Starlight), Second Form M (by Midnight Blue), Second Form D (by Dawn Till Dusk), and Second Form P (by Phantom Green). 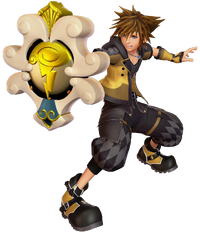 Guardian Form is a form with yellow clothing and a checkerboard design that specializes in defense. It is triggered by Hero's Origin, Hunny Spout, and Classic Tone.

Strike Form is a form with red clothing and a camouflage design that specializes in attack. It is triggered by Favorite Deputy, Happy Gear, and Wheel of Fate.

Element Form is a form with blue clothing and a star design that specializes in magic and long-range attacks. It allows Sora to glide and cast magic in movement. It is triggered by Shooting Star and Ever After.

Blitz Form is a form with green clothing and a flame design that specializes in speed. It is triggered by Crystal Snow, Nano Gear, and Grand Chef.

Rage Form is similar to Anti Form, as Sora and his Keyblade become engulfed in darkness, turning him into a Heartless-like creature that can teleport and deliver rapid attacks. It can activate when Sora reaches critical health, regardless of the current Keyblade.

Ultimate Form is similar to Final Form, as it changes Sora's clothes to white with black markings. It allows him to teleport anywhere while wielding multiple swords in battle, executing his enemies with power at a great range. It is triggered by the Ultima Weapon.

A Summon is a special character that can be magically called on to aid Sora in battle. They have been present in Kingdom Hearts, Kingdom Hearts: Chain of Memories, and Kingdom Hearts II. In the first game, most of these summons were Disney characters whose worlds were swallowed by darkness, although the summons lived on through "summon gems". The Fairy Godmother was able to release a summon from its gem. However, other summons joined of their own free will, like Genie and Tinker Bell. In Chain of Memories, summons came in card form, similar to the rest of the game. In Kingdom Hearts II, Sora could summon by using charms that teleported the summon directly to Sora. The only non-Disney summon is Cloud, who originated from the Final Fantasy franchise. The Disney summons are:

In Kingdom Hearts: Birth by Sleep, a new form of summon was featured, called the Dimension Link (ディメンションリンク, Dimenshon Rinku?), otherwise known as a D-Link. Players can draw power from characters bonded to their Wayfinder in order to use their commands and attacks.

Links are Summons in Kingdom Hearts III. The characters linked through the Heartbinder item can be summoned by Sora to answer his call for help. With the exception of Meow Wow, all the Links appear through an elemental medium, giving them an altered semi-transparent appearance with physical properties to match. These Links are:

Attraction Flow is a series of theme park attraction-based Command system attacks in Kingdom Hearts III. Taking on a glowing appearance similar to Main Street Electrical Parade floats, Attractions can be summoned by Action Commands in certain circumstances, usually when in combat with regular enemies. Attacking enemies with a special green marker will activate the option and the available attraction is based on the amount of open space the battlefield offers.

Trinities are colored marks that are featured in Kingdom Hearts. Interacting with these enable Sora, Donald, and Goofy to unlock new paths or obtain rare treasures. There are a total of five different Trinities, each with their own color, that Sora, Donald, and Goofy can learn throughout the game: Trinity Jump, Charge, Ladder, Push, and Detect.

As they are Sora's closest friends, the Trinity command will only appear if Sora, Donald, and Goofy are the active party members; if another character is in the party instead, the player will not be able to activate a Trinity.

Trinity Limit is an attack present in Kingdom Hearts, Chain of Memories and Kingdom Hearts II that shares the same name as the other Trinities.

There are five Unions in total:

When Dream Drop Distance was remade for the PS4, two in-game trophies were incompatible due to using the 3DS's camera and Streetpass functions, which required for two new in-game trophies to be created exclusively for the HD version.

Trinity Limit is a Special Ability. Selecting Trinity from the last command box causes two red orbs to emerge from Donald and Goofy. The orbs will come to Sora's Keyblade. Sora then executes a few powerful flips and leaps, then does a back somersault, planting his Keyblade into the ground, summoning a large energy wave crushing all enemies down within the area. The more MP Sora has during the executing period, the more powerful the finishing attack becomes. It costs 5 AP to equip, and uses all of Sora's, Donald's, and Goofy's MP, requiring at least 3 bars of MP to activate. In Kingdom Hearts: Chain of Memories, Trinity Limit is an attack sleight that has the same appearance as from Kingdom Hearts. It is a very powerful attack that deals heavy damage, capable of clearing a whole field of enemies.

After each command is executed, the corresponding button command changes to Begin Combo (コンボスタート Konbo Sutāto, lit. "Combo Start"). Selecting it activates the finishing attack, during which Sora, Donald, and Goofy raise their weapons together and unleash a storm of energy that hits all enemies in range. The pose Sora, Donald, and Goofy take for the finisher is similar to their pose when activating Trinity Detect in Kingdom Hearts. To attain as much damage as possible, the Begin Combo command should be used only after all three attacks are performed consecutively. If Sora is without either Donald or Goofy, or both, he only performs a solo version of the Break attack combo. Sora will attack ten times, with the first nine attacks building up to a final, lunging blow that pierces the enemy with a powerful finishing move. This is the only limit that can be used without any party members. It costs 5 AP to equip, and like all Limits, uses all of Sora's MP. The overall damage and efficiency depends on Sora's overall status, including Drive Form levels.

In Kingdom Hearts Birth by Sleep, Trinity Limit is an Advanced-class Friendship Command that takes up three slots in the Command Deck, has a maximum level of 1, and a normal reload time of 40 seconds. If used in the Mirage Arena, up to two other players can join in on the attack. It becomes stronger by pressing