Ultimate Spider-Man
Avengers Assemble
Hulk and the Agents of S.M.A.S.H.
Marvel Disk Wars: The Avengers
Guardians of the Galaxy
Spider-Man
What If...? (upcoming)

Assassin (formerly)
Member of the Guardians of the Galaxy

“I'm gonna die surrounded by the biggest idiots in the galaxy.”
―Gamora[src]

Gamora is a Marvel Comics heroine who is a member of the Guardians of the Galaxy and a major character of the Marvel Cinematic Universe. She is one of the titular protagonists of the Guardians of the Galaxy duology, one of the deuteragonists of Avengers: Infinity War, and a major character of Avengers: Endgame. She is a former assassin who once served her adopted father Thanos before freeing herself and sought to stop him once and for all.

Gamora was created by Jim Starlin.

Gamora is widely known at the most dangerous woman in the universe and skilled in the use of every weapon. She is a survivor of Thanos' massacre on half the Zen Whoberians. The strength she displayed as a child resisting Chitauri forces caught Thanos' eye that the warlord decided to take her in as one of his own once he killed her family.

Gamora is very strong and deadly. While her upbringing by Thanos could have turned her into someone like Cull Obsidian or Nebula, Gamora is actually very friendly and naturally driven by the desire to do what is right, as opposed to what is easy. The latter trait puts her at odds with Star-Lord, who has tender feelings for her, which she eventually reciprocates.

In the film, she is hired by the Collector to secure the Orb and agrees to aid Ronan the Accuser and her sister Nebula under the pretense of helping Thanos but in truth to prevent the Orb from falling into the wrong hands.

She locates the Orb to be in the possession of Star-Lord, and assaults him on Xandar while he tried to sell the artifact to a merchant. Her attack is hindered, however, as two criminals, Rocket and Groot arrive trying to capture Star-Lord for the high bounty on his head. In the battle, all four are arrested by the Nova Corps and transported to the Kyln prison facility. With her reputation as an assassin and connection to Ronan renown, Gamora becomes a quick target to prisoners and guards alike on the ship, especially by a prisoner named Drax, whose wife and child had been murdered by Ronan. With Gamora being connected to Ronan, Drax attempts to kill her, but Star-Lord arrives on the scene and convinces him to let her live since he can get Ronan through her.

Thankful for Star-Lord's assistance, Gamora explains to him her plan to betray Ronan and gets him, Groot and Rocket to work together to escape the Kyln in exchange for the payment promised to her by the Collector. Initiating the plan, the group creates a prison riot while Rocket rewires the ship's systems and are able to arrive at the docking bay and escape onto Star-Lord's ship, however Drax joins the group due to aiding them during the riot, much to Gamora's chagrin. Once they arrive at Knowhere, the location of the Collector, the group recuperates before delivering the Orb. Star-Lord attempts to woo Gamora, but she rejects his advances, finding Star-Lord to be insensitive towards her. Eventually, they arrive at the Collector's base, where the Collector introduces himself. Examining the Orb, the Collector explains that the Orb in fact holds an Infinity Stone. However, Tivan's assistant, Carina, grabs the Stone to use it to escape from the Collector's torment but its power proves to be too much for her body, and she is destroyed in an explosion of energy, which sends the group flying outside.

Ronan arrives due to Drax contacting him to battle, forcing the others to escape by mining ships and are pursued by Ronan's followers. When they chase them into space, Nebula destroys Gamora's ship, leaving her floating and vulnerable to death. To save her life, Star-Lord ejects himself from his ship and gives her his helmet for her to survive while he summons his former Ravager captain Yondu; Yondu arrives and collects the pair before they succumb to the exposure. Rocket, Drax, and Groot arrive to attack the Ravager ship, but Star-Lord manages to persuade Yondu to help them stop Ronan in exchange for giving him the Infinity Stone to sell. Although the rest of the group is doubtful knowing that fighting against Ronan would cost them their lives, Gamora chooses to fight to prevent many other lives lost by Ronan along with everyone else.

They then set course to Xandar, where Ronan is about to purge the planet. With the aid of Yondu and the Nova Corps, Gamora, Star-Lord, Rocket, Groot, and Drax manage to breach Ronan's ship where they are confronted by Nebula. Gamora combats her sister while the others move towards Ronan. Just as Gamora gains the upper hand, Nebula falls with her cybernetic arm clinging on the ship's edge. Gamora tries to lift her up, but Nebula refuses the mercy and cuts her arm off, landing on a ship which she hijacks and escapes. With Nebula defeated, Gamora deactivates the barrier to Ronan's chambers and rejoins the group, but they find themselves completely outmatched by his power until Rocket flies Star-Lord's ship through the ship and collides with Ronan.

The damage causes the ship to crash land on Xandar with the group still in it, but Groot wraps his branches around them to protect the group from impact but sacrificing himself in the process. Ronan emerges from the wreck and dubs the heroes "Guardians of the Galaxy" while stating their efforts to be meaningless and prepares to destroy Xander, but Star-Lord distracts him allowing Drax to destroy Ronan's hammer. Star-Lord grabs the Infinity Stone but its power begins to destroy him until Gamora reaches through the field of energy to Star-Lord and joins hands with him. Drax and Rocket do the same, and they are able to contain its power. With it, Star-Lord uses the Stone to destroy Ronan..

To prevent the Stone from being used to create any more chaos, Quill switches it with a false one to give Yondu while giving the real Stone to the Nova Corps. As a reward for saving the planet, the Nova Corps rebuild Quill's ship and make their team an official protection force, expunging the Guardians' criminal histories as well. Gamora notes to Drax that he had received his revenge against Ronan and his family would be happy, but Drax states that Ronan was only a puppet; Thanos is the one he must hunt down. Taking off in their ship, the Guardians prepare to leave on their next adventure.

Gamora reappears in this film as an enemy to Ego and the Sovereign. Gamora and Peter get closer romantically and finally realize their feelings for each other and they start dating in the following 4 years before the Infinity War.

Hearing a distress call from the Statesman, the Guardians recovered the Norse God of thunder, Thor Odinson. He revealed to the team that Thanos had collected the space stone, and destroyed Xandar to collect the Power Stone. When telling them that he was going to Knowhere, the Guardians went to the planet as Rocket, Groot, and Thor travelled to the dwarf planet to create a powerful weapon.

The Guardians made to Knowhere, and confronted the Mad Titan, with Gamora stabbing him with the switchblade he gave her. It was revealed that Thanos used the Reality Stone to stage the event. While the Mad Titan has Gamora in his grip, she and Peter confess their love for each other, before Thanos kidnaps Gamora from the team. Gamora argues with Thanos on balancing the universe, and later witnesses Nebula being tortured by him while he demands her to reveal the location of the Soul Stone. Watching her sister in pain makes Gamora confess that she found the Soul Stone on Vormir. Thanos takes her there and the two meet the Stonekeeper, who reveals that Thanos must sacrifice what he holds most dear to collect the stone. This raises Gamora's confidence, as she believes Thanos does not understand or see the point of love, but when his love for his favorite adopted daughter becomes apparent, she realizes what is to happen and attempts to commit suicide. However, Thanos stops her and, most unwillingly, throws her off a cliff, allowing him to gain the Soul Stone.

After Gamora failed to stop the Mad Titan, the other heroes are also unable to defeat him. The Avengers, Guardians of the Galaxy, and Doctor Strange are all beaten by Thanos, leading to him wiping out half of the life in the universe. Despite her death, Gamora's soul lies within the Soul Stone and Thanos later talks to young Gamora after succeeding in his goal.

When Thanos of 2014 travels forwards in time to the present in order to attack the heroes of Earth, the Gamora 2014 follows him to the present. After Hulk/Bruce Banner uses the Infinity Gauntlet to undo the snap and bring everyone back to life, 2014 Gamora joins the other heroes in their fight against 2014 Thanos and his army of Chitauri, Outriders and the Black Order, with a resurrected Quill overjoyed to be fighting side by side with the 2014 Gamora, even though the latter has no memory of him.

After the battle, the 2014 Gamora survives Tony's snap off-screen but is not present at his funeral. A deleted scene confirms her survival, and she is shown mourning Tony's death after the battle before leaving on her own. While the Guardians prepare to go back to space, Quill is shown to be searching for the 2014 Gamora. 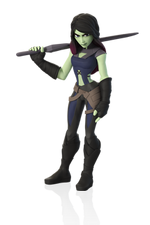 Gamora appears alongside the rest of the Guardians in the Disney Infinity: 2.0 Edition Guardians of the Galaxy Play-set by protecting Knowhere from Ronan the Accuser and his Saakaaran forces.

Gamora, along with Star-Lord, made their first Disney parks appearance as face characters at the "Awesome Mix Tape Dance Party", during the Unleash the Villains event in 2014.

She currently does meet-and-greets at Disney California Adventure, which began in the Summer of Heroes event. In addition, Gamora appears in the Guardians of the Galaxy: Awesome Dance Off! street show.

Gamora was a meet-and-greet character in the 2017 Super Heroes Half-Marathon runDisney event at Disneyland.

The Disney Wiki has a collection of images and media related to Gamora.

Retrieved from "https://disney.fandom.com/wiki/Gamora?oldid=4517605"
Community content is available under CC-BY-SA unless otherwise noted.