“One thousand years ago, superstition and the sword ruled. It was a time of darkness. It was a world of fear. It was the age of gargoyles. Stone by day, warriors by night, we were betrayed by the humans we had sworn to protect, frozen in stone by a magic spell for a thousand years. Now, here in Manhattan, the spell is broken, and we live again! We are defenders of the night. We are Gargoyles!”
―Goliath's narration over the intro sequence in Season 2

Gargoyles is an American animated television series, created by Greg Weisman and produced by Weisman and Frank Paur for Walt Disney Television Animation and Buena Vista Television, and originally aired from October 24, 1994 to February 15, 1997. The series is notable for its relatively dark tone, complex story arcs, and melodrama; character arcs were heavily employed throughout the series, as well as Shakespearean themes.

A Gargoyles video game adaptation for the Sega Genesis, as well as a spin-off comic book series, were also created in 1995. The show's storyline continued from 2006 – 2009 in a comic book series of the same name, written by Weisman and produced by Slave Labor Graphics.

The show formerly aired on Disney XD in the United States, but ended its run in March 2012.

This show is now on Disney +.

Music from the show's introduction was used in the DuckTales reboot series finale episode "The Last Adventure!".

The series features a species of nocturnal creatures known as Gargoyles, that turn to stone during the day, focusing on a clan led by their only named member, Goliath. In the year 994 A.D., the clan lives in a castle in medieval Scotland alongside humans, until many of them are killed by betrayal and the remainder are magically frozen in stone until the castle "rises above the clouds".

A millennium later in 1994, billionaire David Xanatos purchases the Gargoyles' castle and has it reconstructed atop his New York City skyscraper, which towers above the clouds, awakening the six remaining Gargoyles. In trying to adjust to their new world, they are aided by a sympathetic N.Y.P.D. detective, Elisa Maza, and quickly come into conflict with the plotting Xanatos. In addition to dealing with the Gargoyles' attempts to adjust to modern New York (including the others' also taking names - after various parts of the city), the series also incorporated various supernatural threats to their safety, and the world at large.

A total of 78 half-hour episodes were produced. The first two seasons aired in the Disney Afternoon programming block. The controversial third and final season aired on ABC Saturday mornings as Gargoyles: The Goliath Chronicles. Except for the first episode of the season, "The Journey", these episodes were produced without the involvement of the series' creator Greg Weisman and are not considered canonical by him.

Series creator Greg Weisman, a former English teacher, has often cited his goal of ideally incorporating every myth and legend into the series eventually. However, although Weisman created Gargoyles, the series' first season was almost entirely written by the husband-and-wife team of Michael Reaves and Brynne Chandler Reaves. They wrote 12 of the 13 episodes, with the one remaining episode being written by Steve Perry. Weisman himself did not have any writing credits on the show until the third season—a season which, ironically, Weisman has since disowned.

The second season consisted of 52 episodes and featured a much larger writing staff, including Reaves, Chandler Reaves, and Perry, as well as newcomers Lydia Marano, Cary Bates, Gary Sperling, Adam Gilad, Diane Duane, and Peter Morwood, amongst others. For the third season (consisting of 13 episodes), most of the writing staff was new to the show, although returning writers included Marano, Gilad, and Bates.

Many Shakespearean characters and stories found their way into the show's storylines, particularly Macbeth and A Midsummer Night's Dream. The series was also influenced by medieval Scottish history. Weisman also cited the influences of Disney's Adventures of the Gummi Bears and NBC's Hill Street Blues on the series. The latter in particular inspired the ensemble format of the series and the 30-second "Previously, on Gargoyles..." recap found at the beginning of later episodes. The former was an influence on the original comedy development of the show, which was subsequently made darker and more serious before production. Some aspects of the Disney animated series Bonkers, which Weisman helped develop, also influenced the show to some degree. Most noticeably, the relationship of Toon cop Bonkers, and his human partner Miranda Wright, was used as a template for the relationship of Gargoyle Goliath and Elisa Maza, as was the then-recent movie Beauty and the Beast.

New York artist Joe Tomasini brought a suit against Disney, claiming that his copyrighted screenplay and character designs had been copied during the development and production of Gargoyles. The case was ultimately thrown out after it was proven that Disney did not have access to Joe Tomasini's creations.

The show was only moderately successful at the time, yet did not fall into obscurity. In 2009, IGN ranked Gargoyles 45th place on the list of top 100 animated series of all time ("A decent success at the time, Gargoyles has maintained a strong cult following since it ended more than a decade ago"). In 2010, Hollywood.com featured it on the list of six cartoons that should be movies. In 2011, UGO.com included it on their list of legendary medieval and fantasy TV shows "that rock your face".

Gargoyles comics were published in the magazine Disney Studios Adventures, 11 stories in total. A two-part story "Stone Cold" is notable in that it provided a story idea that was later used in the TV series in the episode "The Price". Another story, "The Experts", was intended as tie-in advertising for Disney's The Hunchback of Notre Dame.

In 1995, Marvel Comics issued a Gargoyles comic book series that ran for 11 issues. The books did not directly follow the continuity of the series, but they did reference specific events that took place within it. The Marvel series was tonally darker than the animated television series, dealing largely with Xanatos' experiments to create creatures and machines to defeat the Gargoyles. Greg Weisman, television series co-creator, did not have any direct involvement in the story development of the comic series, but was consulted on some plot points to be sure it stayed within certain boundaries.

Weisman was eventually hired to write for the comic, but Marvel cut the deal with Disney before his run could be produced. Weisman still has his unpublished script for the comic, and would eventually use it as issue #6 of Gargoyles SLG comic. The characters Beth Maza (who appeared in a photo in "Deadly Force") and Petros Xanatos appeared in the comics before their full debut on the show.

In August 2008, Greg Weisman announced that, due to Disney increasing its licensing fees, Slave Labor Graphics would not be renewing its license of Gargoyles after it ran out on August 31, 2008. The final two issues of Bad Guys and four of Gargoyles were released in the comic trades collecting both series in August 2009. Weisman also stated that SLG president Dan Vado has not given up on the Gargoyles franchise and hopes to pursue the idea of Gargoyles graphic novels in the future.

A series of 22 five-inch action figures (along with two vehicles and a castle playset) was released by Kenner in 1995.

The Gargoyles video game was released in the United States by Buena Vista Interactive exclusively for the Sega Genesis in 1995. The game was a side-scrolling platform action game. Its plot was considered non-canon and involved the Eye of Odin attempting to destroy the world.

A small-but-loyal fanbase for the property developed after its cancellation, largely online.

In 1997, Weisman began answering fan questions about the series in an online forum at Ask Greg, revealing, among other things, productions details about the TV series, in-universe details about the characters, and his plans for the property if it had not been canceled or if he was able to revive it in the future. Among other revelations, Weisman has detailed spinoffs for the series that reached various stages of development, including Bad Guys (for which a Leica reel and comics were produced), Gargoyles 2198, Timedancer, Pendragon, Dark Ages, and The New Olympians.

The Gathering of the Gargoyles was an annual fan convention, which ran from 1997 to 2009. The Gathering featured several regular guests close to the Gargoyles franchise including Greg Weisman and voice actors Keith David and Thom Adcox. The Gathering has featured several recurring special events such as a radio play where attendees audition and take speaking roles, a masquerade ball where attendees dress up as their favorite character, and an art show where the many artists within the fandom can display or sell their artwork. Weisman has in the past shown the Leica reel of Bad Guys at Gatherings.

Footage and interviews from the 2004 Gathering appear as an extra feature on the Season 1 DVD of the TV show. 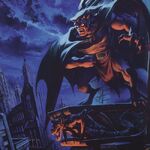