2004-present
Garrett John Hedlund is an American actor, model, and singer. He is known for starring in films, such as Don Billingsley in the 2004 comedy Friday Night Lights, Jack Mercer in 2005's Four Brothers, Murtagh in the 2006 adaptation of Eragon, and Beau Hutton in 2010's Country Strong.

For Disney, he portrayed Sam Flynn in the 2010 Disney science-fiction film, Tron: Legacy.

Sam Flynn
(Tron: Legacy)
Add a photo to this gallery

Garrett Hedlund at premiere of Tron: Legacy in December 2010.

Garrett Hedlund speaks onstage at the 13th annual Young Hollywood Awards in May 2011. 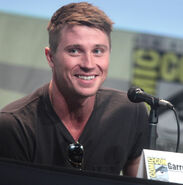 Garrett Hedlund arrives at the 90th annual Academy Awards in March 2018.
Add a photo to this gallery

Retrieved from "https://disney.fandom.com/wiki/Garrett_Hedlund?oldid=4220481"
Community content is available under CC-BY-SA unless otherwise noted.