Mary
Gary Michael Cole is an American television and film actor and voice actor. He is known for his roles in movies, such as Office Space, Pineapple Express, Dodgeball, and Talladega Nights: The Ballad of Ricky Bobby. He is also well known for his role as Kent Davison on the HBO sitcom Veep.

For Disney, he voiced Dr. James Possible in the Disney Channel animated series Kim Possible, Principal Lang in Phineas and Ferb, and Brock Zero in Penn Zero: Part-Time Hero. He also played Don Kitch in The Art of Racing in the Rain. 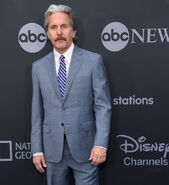 Gary Cole attending the 2019 Disney ABC TV Upfront.
Add a photo to this gallery
Retrieved from "https://disney.fandom.com/wiki/Gary_Cole?oldid=4246524"
Community content is available under CC-BY-SA unless otherwise noted.