1983-present
Gary Allen Trousdale is an American film director, animator, and screenwriter, known for directing movies, such as Beauty and the Beast, The Hunchback of Notre Dame, and Atlantis: The Lost Empire. He frequently works with Kirk Wise and Don Hahn.

Trousdale planned to become an architect, but decided instead to study animation at CalArts. First hired by the Walt Disney Animation Studios in 1983 as an effects in-betweener on The Black Cauldron before making his directorial debut with Beauty and the Beast, which was nominated for an Academy Award for Best Picture and won a LAFCA Award.

He later moved to DreamWorks Animation in 2003, where he worked on projects, such as Madagascar, Flushed Away, The Madagascar Penguins in a Christmas Caper, Shrek the Halls, and Scared Shrekless. 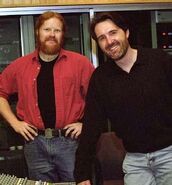 Trousdale and Wise's cameos in Beauty and the Beast