Gazelle is very popular in the world of Zootopia, having many fans, which include Judy Hopps, Clawhauser, and surprisingly even the normally gruff and hard to impress Chief Bogo. Her importance and popularity stem from the fact that she is very socially-minded and is all about acceptance and equality for all.[1]

Shakira's involvement with the film begun when the directors met her around 2013. She fell in love with the idea and the central message.[1]

Gazelle is liked by almost all the citizens of Zootopia given her status as a famous pop star. Despite being a pop idol, Gazelle doesn't see herself as above anyone else, she is humble and kind.

Like Judy, she cares for equality and loves Zootopia because she believes it is a place where animals are equals regardless of whether they are predators or prey, something that she's very passionate about. Her upbeat and accepting nature shows no limits to how far she thinks of others based on species. She even held a peace rally when the conflicts between predator and prey arose, her peaceful nature shows how level-headed she is in unfairness situations such as prejudice. All of her dancers are also shown to be predators, namely tigers, holding true to her values.

Gazelle, as her name obviously implies, is a gazelle with a slender figure, amber fur with a beige underside going up to her throat and muzzle. She has long, curving dark gray horns and light brown eyes. She has long, wavy locks of blonde hair that go over half her face.

Given her status as a pop idol, Gazelle wears a sparkling red skirt, crop top, and shoes with leggings that are below her knees. Her skirt also has a silver belt around it.

Gazelle is a pop singer/songwriter, choreographer, and was first introduced singing her song "Try Everything", on Judy Hopps' playlist as she is traveling to Zootopia, then at the end, where she was seen as a recording on a jumbo-tron TV introducing herself and saying "Welcome to Zootopia". She is later featured on a phone app where the user can tag their face on a tiger backup dancer performing next to Gazelle, which Clawhauser and Chief Bogo are fans of.

Later on, as fear and discrimination against predators take hold in Zootopia for fear of them going savage, Gazelle holds a peaceful protest and publicly asks for the harmonious Zootopia she loves and cherishes to be restored, with many refusing to join.

During the end credits, Gazelle, flanked by four dancing tigers, holds a concert in the middle of town square for all of Zootopia, including those incarcerated (though they all dance to it except for Bellwether and Lionheart).

Gazelle and her tiger dancers appear during the end credits of the Zootopia entry of the As Told by Emoji short series.

A picture of Gazelle on Judy's iPod.

"Wow! You are one hot dancer, Chief Bogo."

"Please, give me back the Zootopia I love."

"Good evening, Zootopia! Come on, everybody, put your paws up!" 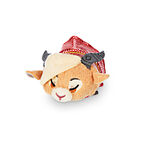 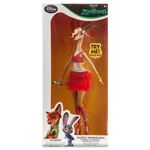 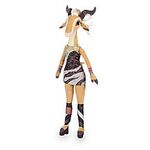 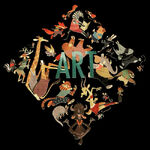