Alizeh, Kian, and Kaiis
Virginia Elizabeth "Geena" Davis is an American actress, film producer, writer, former fashion model, and a women's Olympics archery team semi-finalist. She is best known for her movie roles as Veronica "Ronnie" Quaife in The Fly, Barbara Maitland in Beetlejuice, Thelma Yvonne Dickinson in Thelma & Louise, Dorothy "Dottie" Hinson in A League of Their Own, Samantha Caine/Charlene "Charly" Baltimore in The Long Kiss Goodnight, Mrs. Little in the Stuart Little film trilogy, and Muriel Pritchett in The Accidental Tourist, for which she won the 1988 Academy Award for Best Supporting Actress. 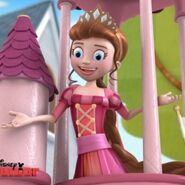 Persephone
(Doc McStuffins)
Add a photo to this gallery

Geena Davis speaks at The Exorcist panel at the 2016 Summer TCA Tour.

Retrieved from "https://disney.fandom.com/wiki/Geena_Davis?oldid=3911101"
Community content is available under CC-BY-SA unless otherwise noted.