To protect the city from nighttime villains

Romeo's tricks, things going wrong, his friends not listening to him or taking him seriously, accepting help (formerly), his friends in danger, being captured, outer space (formerly), Armadylan's recklessness, being laughed at, someone taking credit for what he does, sticky splats, Night Ninja, being attempted, being treated like a baby, Owlette drawing on the walls (when she was zapped by the baby beam)

Gekko is the youngest member of the team, but he's a strong and sticky master of camouflage! He's ready to rush into danger and save the day with his super Gekko muscles. Always ready for action, Gekko can scale walls and with his Gekko-mobile so can all the PJ Masks! It can even travel underwater... Watch out baddies, here comes the mighty Gekko!

As Greg, he can sometimes be competitive when it comes to playing games, but he isn't very good at rhyming (as evidenced in "Speak UP, Gekko!" and in the theme song of the series). When he isn't Gekko, he isn't as strong, and that sometimes causes him to doubt himself. This is usually remedied by Connor and Amaya's encouragement. He's also nice, friendly, helpful, somewhat shy, fun, playful, and funny.

As Gekko, he pretends to be Kick McGee along with Catboy playing as Master Fang during missions. He sometimes displays insecurity, such as in Gekko's Super Gekko Sense when he made up a new power due to thinking that the powers he actually had would now help win the game. He can be easily distracted (which was emphasized in "Slowpoke Gekko"). Like his fellow teammates, childlike immaturity tends to overtake his mindset on the mission leading to issues (such as rejecting Owlette's desire to play along as Flossy Flash with them in "Catboy and Gekko's Robot Rampage"), but this is always realized and corrected leading to the mission being done properly, and the villain's plans foiled.

Greg has fair skin, blond hair, and green eyes. His daytime outfit consists of a light green sweatshirt with a brown lizard image at the center and a pair of beige pants and cream shoes.

The outfit of Greg's nighttime hero, Gekko, consists of a green mask and pajamas with dark green pads that transform into shields when Gekko activates it and says, "Super Gekko Shields!" but the pads on his legs do not work like the ones on his shoulders. He has scales on his costume for decoration and his head includes horns that are in order from biggest to smallest.

The following powers were temporarily gained in "Owlette of a Kind":

Greg in his everyday outfit 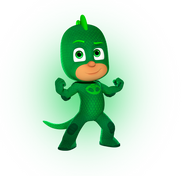 Greg in his pajamas

Retrieved from "https://disney.fandom.com/wiki/Gekko?oldid=4333488"
Community content is available under CC-BY-SA unless otherwise noted.