A Disney Friend of Duffy

“This is Gelatoni. He lives in Mediterranean Harbor and loves to draw pictures.”
―Gelatoni's backstory.

Gelatoni (ジェラトーニ) is a green tuxedo cat appearing in Mediterranean Harbor at Tokyo DisneySea. He loves painting and drawing pictures.

One day while visiting Italy on their spring voyage, Duffy and Mickey were out for a stroll while Minnie and ShellieMay did some shopping. Suddenly...

"Oh no! My gelato!" cried Duffy, as his sweet treat plopped to the ground.

"Va bene, don't worry," said the green tuxedo cat in the bright blue beret. "Ciao! I'm Gelatoni." And the funny little cat dipped his tail in the melting gelato and began painting with it. Duffy smiled and said, "I'm Duffy."

After they finished, the two new friends happily exchanged their masterpieces. "Let's play again sometime!" they both agreed.

One day, Mickey and Duffy were visiting Mediterranean Harbor. Mickey was taken by the lovely view. "Oh boy! This place is beautiful!"

While strolling around the scenic neighborhood, Mickey bought Duffy a gelato.

"Ooooo, this looks yummy!" As Duffy was about to have a taste, the gelato fell to the ground. "Oh no!"

Just then, a boy kitten appeared and said to Duffy, "Don't worry. Watch this!"

The kitten used his long tail as a brush and started to paint a picture with the dropped gelato.

"You know, everything has heart," Gelatoni said to Duffy. Just then Duffy started to see the flowers smiling at him!

As the sun began to set, they decided to draw their last pictures.

When they showed their pictures to each other, they realized they had both drawn a picture of the two of them standing side by side, like good friends! That made them happy.

It was time for Duffy to return to Cape Cod. They exchanged their pictures and said, "Let's play together again!"

After coming back to their own homes, Duffy and Gelatoni hung their pictures in their favorite places.

The pictures made them feel like they were right next to each other. The two friends hoped they would meet again soon. 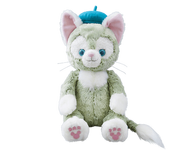 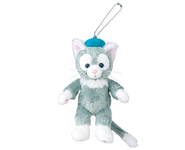 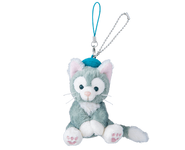 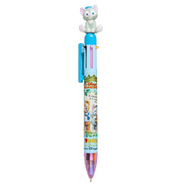 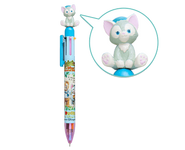 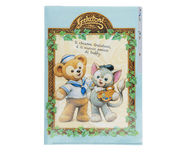 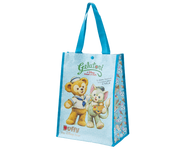 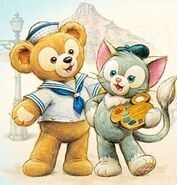 Gelatoni, Duffy and ShellieMay in Cape Cod in American Waterfront at Tokyo DisneySea.