Defeat, being abused, his father, the New Republic, the Resistance, Pryde being promoted to Allegiant General, Kylo Ren

“All remaining systems will bow to the First Order! And will remember this.... as the last day of the Republic!”
―General Hux to the members of the First Order[src]

General Armitage Hux is Kylo Ren's rival and the general of the military forces of the First Order. He is a major antagonist in the Star Wars sequel trilogy and of the animated series Star Wars Resistance.

Armitage Hux is the illegitimate son of Brendol Hux, a commandant in the Imperial Academy on Arkanis, with an unnamed kitchen woman. Being Brendol's son outside the marriage with his wife Maratelle, during his childhood, he suffered physical and psychological abuse from his own father and was a target of gossip among Imperial officers. Because he was born during the last days of the Galactic Empire, Hux also grew up learning stories of the Empire and how it saved the galaxy from the Clone Wars, and came to believe that it was his destiny to rule the galaxy.

When the Empire signed the Galactic Concordance and surrendered to the New Republic, Hux, his father, and other Imperial officers, believed that the New Republic was weak and would never live up to the supreme power of the old Empire. So Hux and other Imperial Officers fled to the Unknown Regions first explored by the Empire, where they would create the First Order, a military and political cabal following the Empire's ideology. Hux achieved military superiority throughout the Order, eventually gaining the rank of General.

Hux is young and ambitious. He longs to reveal the full power of the First Order's military to the galaxy, but is held back by those defiant to the Order and the superior might of his peers. Although he is dedicated to the First Order's cause, he has a rivalry with Kylo Ren, and constantly vied with Ren for Snoke's attention. The reason for this in part was due to the fact that Ren's agenda trumped the general's own.

Thus, Hux never let slip a chance to humiliate Kylo in front of Snoke. Unlike his rival, Hux is more precise and tactical in his methods, and collected in commanding his First Order subordinates. A man of science, Hux has little understanding or tolerance of the Force, going as far as considering Kylo Ren's abilities as mystical, and believed his program of training Stormtroopers from infancy was nearly flawless. He also took great pride in the use of Starkiller Base upon his enemies, and was supremely confidant in its abilities.

Hux is much more indifferent to others than Kylo Ren. With Phasma's help, Hux was the responsible for the death of his own father, which is similar to Kylo but while the dark warrior was consumed by remorse right after the act, Hux never regretted his action and bragged about his accomplishment even years later. He had developed a grudge against his father after years of humiliation and abuse, as Brendol Hux considered his bastard son unworthy and useless. This eventually made Hux a bitter and vengeful individual, but he normally hides it behind a false calm and even polite demeanor. He is also similar to Tarkin to the extent where he is very willing to kill hundreds of billions of innocent lives to assert the First Order's power.

Hux is short-sighted, when he learned that the other half of the map to Luke Skywalker's location is in the possession of a droid (BB-8), he wanted to have it destroyed, only to have his authority undermined by Kylo Ren, as he failed to realize even if they destroy the droid, the Resistance would have eventually found Luke even without the map. He is also delusional, as he believed that destroying the capital of the New Republic would end the republic itself.

He is also a very treacherous and scheming individual. Despite his apparent loyalty to Snoke, he had secret plans to overthrow him and take his place as Supreme Leader. This is noted by Kylo, who warns Snoke about what is in Hux's mind, but the Supreme Leader is unfazed and unconcerned about the machinations of his minion. When Kylo becomes Supreme Leader, Hux can not handle seeing his rival in power. He is also so frustrated by Kylo's decisions as a leader, including the promotion of Allegiant General Pryde instead of favoring his military career, that he goes as far as betraying the First Order and spying for the Resistance in order to have Kylo killed.

Hux commanded Starkiller Base during the time of the film. With the superweapon prepared, Hux informs Snoke of the current success at the base with Kylo Ren, the latter having spent the time trying to search for the rogue BB-unit BB-8 containing information on the lost Jedi Luke Skywalker. Snoke commends Hux and chides Ren for his lack of progress. In the dawn of the Resistance attack, Hux speaks to the assembled troops and demonstrates the Starkiller weapon's power by destroying several planets at once. When the Resistance later destroys Starkiller Base, Hux is ordered by Snoke to retrieve Ren before evacuating and return Ren to Snoke so the latter could finish his training.

He attempts to respond to a transmission from Dameron, who pretends not to hear him and describes him as "pasty." Hux then leads the subsequent battle, during which both sides sustain heavy losses. He also oversees the bombardment of the remaining three ships of the Resistance. When he discovers that Snoke is dead, he attempts to murder Kylo Ren that is unconscious in the throne room but stops when Ren suddenly wakes up. He initially protests Ren's claim to be the new Supreme Leader, but is swiftly persuaded otherwise when Ren uses the Force to choke him, proclaiming "The Supreme Leader is dead, long live the Supreme Leader." At the end of the film, he accompanies Ren to the planet Crait in their attempt to finish off the Resistance. When Ren orders his men to fire on Luke Skywalker, Hux admonishes him to focus on the escaping Resistance members; Ren silences him by using the Force to slam him into a wall, knocking him out. However, Hux turned out to be right as Skywalker had distracted Ren long enough for the Resistance members to escape. Once they fled, Hux and Ren, along with their armies searched the empty base.

General Hux's speech from The Force Awakens was broadcast through all First Order channels, which Kaz and Torra witness. Like the film, he gives the order for Starkiller Base to be fired, destroying all of the planets in the Hosnian system along with the Senate and killing trillions of people. Kaz originally believes that his parents were among the casualties, but it is revealed in the following season that they were off-world and were therefore spared.

General Hux appears in "Station to Station" to give an important briefing about their progress against the Resistance, but then encounters Kazuda Xiono and Neeku Vozo, who were disguised as technicians trying to steal a Trans-Binary deflector. After Pyre's failed attempt to apprehend them, General Hux orders him to find the Colossus and destroy it.

After Aeos Prime was bombarded, Agent Tierny and Commander Pyre contacted General Hux to report they have dealt with the inhabitants, but he is not happy that they still failed to locate the Colossus Resistance cell, and has them answer to Kylo Ren for their failure.

A year later, after Ren assumes the role of the Supreme Leader, Hux grows disillusioned with the First Order, or rather, with Kylo Ren. When the supposedly deceased Emperor Palpatine reveals himself to the galaxy, Hux becomes a mole to the First Order and sends messages to the Resistance, informing them of Sidious' return.

When Ren gets his mask fixed, he questions Hux over his uncertainty, but Hux reassures the Supreme Leader that he's not bothered by his repaired mask.

When Finn, Poe, and Chewie are caught aboard Ren's Resugent-class Star Destroyer Steadfast, they are taken to be executed by stormtroopers. Hux walks in and says he would rather be the one to kill them, but instead he kills the stormtroopers and reveals himself to be the Resistance spy. He then assists Finn, Poe, and Chewie in escaping, at which point he asks Finn to shoot him in the arm so he can pretend that he tried to stop them but failed. Out of spite, Finn shoots him in the leg instead. When Finn questions why he is helping them, Hux replies that he doesn't care whether or not the Resistance wins as long as Kylo Ren loses.

Hux gets his wound bandaged and tells Allegiant General Pryde that he attempted to stop Finn, Poe, and Chewie but they forced him to help them escape. Pryde sees through this, grabs a blaster from a nearby stormtrooper, and shoots Hux dead for treason.

Although they both serve the First Order to destroy the Resistance and conquer the New Republic, they do not get along at all, partly due to them both trying to win the approval of Snoke and mainly because Hux's arrogant, rude, short-sighted and delusional traits. Ren once threatened Hux, stating that if he ever pushes him too far he will kill the latter without hesitation, Hux on the other hand, dislikes Ren in part because of his hot-headed temper. Additionally, Hux had little patience or understanding for Force-users like Kylo Ren in general, as he was a man of science and not mysticism, further putting them at strenuous odds.

General Hux gives his speech to the First Order.

Witnessing the firepower of Starkiller Base.

Hux attempts to shoot Kylo when he finds him unconscious in the Supremacy's destroyed throne room.

Hux with Stormtroopers lining up in the background.

Concept art Hux along with other members of the First Order on Mustafar.

Hux on the cover of Age of Resistance: General Hux comic. 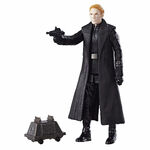 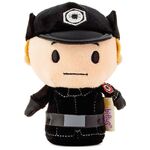