Lewis was born in 1935, in Plainfield, New Jersey, but spent much of his youth in Wrightwood, California. He took acting classes at the Neighborhood Playhouse in New York City and performed off-Broadway and at regional theaters in Massachusetts and attempted to break into Hollywood in the 1960s. While appearing in character roles in films like The Great Waldo Pepper, Down in the Valley, The Butcher, Maverick, When Every Day Was the Fourth of July, and The Lawnmower Man; Lewis appeared in various films made or starring Clint Eastwoood such as Midnight in the Garden of Good and Evil, Pink Cadillac, Any Which Way You Can, Bronco Billy, Every Which Way But Loose, Thunderbolt and Lightfoot, and High Plains Drifter.

He passed away on April 7, 2015 at his Woodland Hills residence. 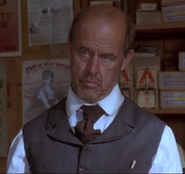