Disorder, chaos, being insulted, interruptions in his routine, the idea of giving back Michael's tuppence, the word "Supercalifragilisticexpialidocious" (formerly)

Jane Banks (daughter)
Michael Banks (son)
George Banks, more commonly known as "Mr. Banks", is the former main antagonist in the 1964 film, Mary Poppins. He is similar in character to George Darling from Peter Pan, and was inspired by P.L. Travers' own father, himself a strict, no-nonsense banker and was inspired by Walt Disney's father, Elias, as well.

George is a junior officer in one of London's banks. According to dialogue, he has worked there for many years. It is also mentioned that his father (thus Jane and Michael's paternal grandfather) had worked there too.

George believes (or at least originally believed) that his family should be run like a bank, making them efficient, but also making him a distant husband and father. He's not really considered to be an evil person, but he is a stern, practical man (much like George Darling), and initially believes that his children, Jane and Michael (and all children of the time in general for that matter), should be prepared for adult life in their youth, rather than allowed to have fun, as he believe having fun is "ridiculous". He also callously dismisses the "Votes for Women" movement that his wife, Winifred, is involved in, as her cause makes him furious. However, after the events of the film, he changes and becomes a much more caring and devoted family man.

According to the Special Edition Soundtrack Bonus Disc, it was originally intended that the script hint in several places that Mary Poppins was George's nanny when he was a child. However, this seems to have been largely left out of the film.

George is initially seen at the beginning of the film walking home from work. He runs into Katie Nanna on his way in but doesn't know she has quit. After his introductory song, which reveals his opinions on how a family of his day must be led, he realizes that Jane and Michael are missing and thus takes matters into his own hands. As he is calling the police, Constable Jones brings Jane and Michael home; they had become separated from Katie Nanna while having trouble with their kite. He tells the maid, Ellen, to take them to the nursery (a term used in those days to refer to the children's quarters) and declares that he intends to discuss the matter with Katie Nanna, only to find out that she had quit due to their seeming unruliness, enraging him.

Noting that Winifred's choices for a nanny have failed for a quarter of a year, George decides that he will select the next person himself. He drafts an advertisement, calling for an authoritarian nanny who "can give commands" and "mold the breed". Jane and Michael come with their own advertisement, calling for a kinder nanny who will play with them, sing songs, be very beautiful, and give them rewards for being good. George politely but bluntly dismisses them and when they are not looking; he tears it up and throws the pieces in the fireplace before lighting it for the night.

The next day, George prepares to interview the nanny applicants. However, the only one is Mary, who mysteriously has the advertisement that Jane and Michael had written. While she discusses her hiring with him, he is so confused about the recovery of the advertisement that he mumbles to acknowledge her as he looks in the rubble in the fireplace; as a running gag every time somebody asks him something or comes next to him he hits his head on the fireplace top. When he mumbles during his look at it; he unintentionally mumbles out "Yes" when Mary asks if she can have the job; thus unwittingly hiring her.

The next morning, George is puzzled by the unusual cheerfulness of the rest of the household and is rather annoyed by it, as he expects everyone to be more practical and less noisy. He is accused of being out of sorts by Winifred, which infuriates him, and he storms out the door to work. That night, he becomes worried by Jane and Michael's outrageous tales of their adventures with Mary. He asks to speak to her, and dialogue from Ellen and the cook, Mrs. Brill, suggests that he is preparing to fire her. However, she turns the discussion around in her and Jane and Michael's favor and is able to make him believe that he has suggested that he take them to the bank where he works. He is pleased with the idea, as he believes that it will help them to be more practical.

The next morning, George walks with Jane and Michael to the bank. On the way, they see the Bird Woman, whom Mary had sung to them about the night before. They ask permission from George to feed the birds, but he angrily refuses, believing it to be a waste of money and time, and he suggests what he believes to be a better way. At the bank, he introduces them to his bosses, Mr. Dawes Sr. and Jr.. Alongside the other officers, he attempts to convince Michael to deposit his tuppence into the bank by telling them about the world of finance and what he can do with all the money he can accumulate in an account of his own. He, of course, refuses and says he wants to feed the birds, but Mr. Dawes Sr. finds an opportunity and takes it from him anyway. His attempts to retrieve it cause a run on the bank. In the chaos, he and Jane run away as George tries to stop them and to help the Dawes stop the chaos.

That night, George angrily returns home, to find Mary, Bert, and a swarm of chimney sweeps partying there. Bert sends the chimney sweeps away and hires himself as the family sweep in a similar manner to Mary's hiring. He strictly finally asks her what is going on in her career with the Banks family, but she refuses to tell him. He talks to George while he is gathering his brooms. He recounts his belief that Mary had tricked him into the bank outing in order to embarrass him. Bert even tells him that even when he was to work, he needs to spend more time with Jane and Michael before they grow up. After Bert leaves, they come (dressed in their nightclothes) and Michael gives George the tuppence, innocently believing that that will fix everything. He, slowly changing his heart, gently accepts the offering and politely asks them to go to bed.

George is called back to the bank. There, the officers hold him responsible for causing the bank run, which has been their greatest money loss "since we financed that tea shipment to the American Colonies that got ruined by those rebels" (The Boston Tea Party). As punishment, he is fired, by being cashiered, in which his bowler hat is torn and his umbrella is pulled inside out. Momentarily somber, he then feels happy and wears the smashed bowler hat with pride and uses the destroyed umbrella like a walking stick. When asked if he had anything to say, he remembers and for the first time correctly pronounces Mary's special word, "Supercalifragilisticexpialidocious". Laughing, because the word serves to make him feel better, he leaves in a better mood, even stopping to tell a joke to Mr. Dawes Sr. Notably, it was one that Michael had told him earlier, but one that he had shrugged off at the time. Soon after he leaves, Mr. Dawes Sr. rapidly (and literally) laughs himself to death, his lifeless body floating in the air.

The next morning, it is revealed that George had spent the night in the basement, fixing Jane and Michael's broken kite. He then takes his family kite flying, having apparently resolved to be a better father and husband. While kite flying, he is met by Mr. Dawes Jr., who informs him that Mr. Dawes Sr. died laughing the night before. He expresses his condolences, but Mr. Dawes, Jr., notes that Mr. Dawes Sr. had died happier than ever in his life as a result of hearing George's joke. In gratitude, Mr. Dawes Jr. (who has now taken over the bank) promotes him to a partner to fill the vacancy that was left by him taking over the bank. At the film's close, George is seen happily kite flying with his family.

George doesn't appear in the sequel, which takes place twenty-five years after the original film, but he is heavily mentioned during the film. Although his fate is never directly stated in the film, it is clear that he has long passed away by the time of the story. He has a grandson, Georgie, who is named after him.

It's mentioned since he was Mr. Dawes Jr.'s partner, he must have shares in the bank. He is again mentioned by Jane when Michael throws out the kite that they used to love flying with him and Winifred. There are also photos of them all around the Banks' house. George is mentioned again as William Weatherall Wilkins checks through people's bank savings to find his. When he finds it after Jane and Michael leave, he throws it away. He is last mentioned when Mr. Dawes Jr. gives Michael back his house as he mentions his Certificate of Shares, in addition to telling him that when he gave George his tuppence, he invested it into a great fortune enough to save their house.

Like the film, the musical depicts George as a stern, practical man, who is somewhat out of touch with his family. But rather than being fired for indirectly causing a bank run, he is shown having to choose accounts for the bank to invest in. He chooses a middle-class man's factory over a rich man's Ponzi scheme, which appears to harm the bank. As a result, he is suspended and he takes his anger out on his family rather than himself.

The second act reveals that George had a very harsh nanny, Mrs. Andrews, growing up, whom he describes as a holy terror after Winifred hires her in an attempt to please him. Later on, he hides in the park, depressed about his lack of achievements. Winifred discovers him and learns how he suffered at the hands of Mrs. Andrews. After returning home, he receives a telegram requesting his presence at the bank. He worries that he is to be fired (like in the film), and decides to sell the family heirloom. However, it is accidentally broken by Mrs. Brill, who had been cleaning it. As he is cleaning up the pieces, he finds some gingerbread stars from his childhood.

He briefly reflects, and then goes to meet the bank chairman. At the bank, he is amazed to learn that they consider him a hero, as his previous investment has made a fortune for the bank. He gives Mary's word as the word of success. He apologizes to Winifred, who had come to the bank to defend him, for his treatment of her. He then returns home, happily waltzing with his family looking on.

George with his family 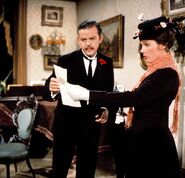