Kelly Carlin
George Denis Patrick Carlin was an American stand-up comedian, actor, social critic, and author, who was noted for the Seven dirty words comedy routine. He was best known for his roles as Rufus in the Bill & Ted film franchise, and for narrating the US dub of the first four series (replacing Ringo Starr in the first two) of the long running children's television series Thomas & Friends from 1991 to 1995, and for portraying Mr. Conductor on Shining Time Station from Season 2 to Season 3.

For Disney, he voiced Zugor in the 2005 Disney direct-to-DVD film, Tarzan II and Fillmore in the 2006 Disney/Pixar film, Cars and several video games. Lloyd Sherr replaced him as the voice of Fillmore in Cars 2 after his death in 2008. He also played Frank Madras in Outrageous Fortune, Justin Case in the TV movie of the same name, and Bart Trinke in the Miramax Films film, Jersey Girl.

He was mentioned in the The Muppets episode "Hostile Makeover". 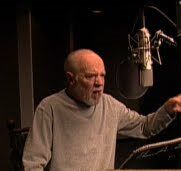 George Carlin behind the scenes of Tarzan II