Ella and Alexander Clooney
George Timothy Clooney is an American actor, film director, producer, and screenwriter, who was best known for his role as Dr. Douglas "Doug" Ross on the NBC medical drama series ER from 1994 to 1999 and Batman (replacing Val Kilmer) along with Chris O'Donnell as Robin in Batman and Robin. He also played Danny Ocean in the 2004 action comedy Ocean's Eleven and its two sequels. He even voiced the title character in the 2009 stop-motion animated film adaptation of Fantastic Mr. Fox.

He is Miguel Ferrer's cousin on his father's side.

For Disney, he portrayed Bobby Hopkins in The Golden Girls episode "To Catch a Neighbor". He also starred as Frank Walker in the 2015 Disney science fiction film, Tomorrowland and Ulysses Everett McGill in the 2000 Touchstone Pictures film, O Brother, Where Art Thou?. He was mentioned in an episode of BUNK'D, the K.C. Undercover episode "First Friend", the The Muppets episode "Single All the Way", and the Jessie episode "Acting with the Frenemy". He also directed an upcoming episode of the Marvel Cinematic Universe Disney+ series Moon Knight. 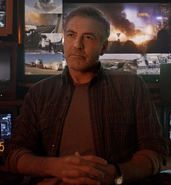 George Clooney at Tomorrowland premiere in May 2015.

George Clooney with Bob Iger and Willow Bay on the Monorail ride in Disney Land in July 2015.

George Clooney speaks at the Catch 22 panel at the 2019 Winter TCA Tour.