"Whoops!"
"Very good. Very good. But I think we should get on with the will."
"Ta-ra-ra Boom-de-ay!"
"That bird cage? Poppycock! Elevators are for old people."

Georges Hautecourt is a minor character in Disney's 1970 film The Aristocats.

Georges is not only an old friend to Madame Bonfamille but works with her in a more official capacity as her lawyer. Despite his old age, he does appear to be fairly competent in terms of law. Due to his old age, he can be slightly eccentric at times, doing such things as mistaking Duchess' tail for Madame Bonfamille's hand. In general, he is fairly friendly and is noted to have a liking for music.

Georges is summoned to Madame Bonfamille's house early in the film. Refusing the elevator, he has Edgar, Madame's butler, escort him up the staircase. After a rather eventful climb, he begins a meeting with Madame Bonfamille. Though he initially believes he is suing someone, he soon learns that Madame Bonfamille simply wishes to create her will. Due to her lack of living relatives, Georges initially believes Madame Bonfamille will leave her fortune to Edgar but is soon corrected when she reveals her intentions to leave it to her cats, with Edgar inheriting after their lifespan is complete. Unknown to either of them, Edgar is listening in and determines a plan to remove the cats so that he may inherit first.

At the end of the film, Georges is summoned back to the mansion to alter the will by removing Edgar, who apparently left. (Edgar's kidnapping of the cats, as well as his subsequent defeat remain unknown to either.) Madame reveals to him that she has adopted the alley cat Thomas O'Malley, alongside her own cats. In addition, Georges soon learns that Madame Bonfamille has started a foundation for the Alley Cats of Paris after hearing music and comparing it to a "gang of swinging hepcats."

Georges Hautecourt appears as a small cameo with Madame Bonfamille in the House of Mouse series. 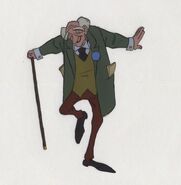 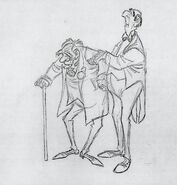 Georges Hautecourt 9.jpeg
Add a photo to this gallery

"Elevators are for old people."

Hautecourt goes for a packback ride. 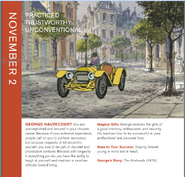 His Disneystrology page
Add a photo to this gallery

Retrieved from "https://disney.fandom.com/wiki/Georges_Hautecourt?oldid=3345773"
Community content is available under CC-BY-SA unless otherwise noted.