3
Georgina Marie Cordova, known professionally as Georgie Kidder, is an American voice actress. She is known for voicing Haiku and other characters on the Nickelodeon animated series The Loud House.

For Disney, she voiced Jack Bear on the Disney Junior series Goldie & Bear and Louie in the Doc McStuffins episode "Loud Louie". She also voices Hornadette in Vampirina. 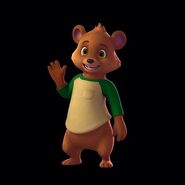 Jack A. Bear
(Goldie & Bear)
Add a photo to this gallery

Retrieved from "https://disney.fandom.com/wiki/Georgie_Kidder?oldid=3889022"
Community content is available under CC-BY-SA unless otherwise noted.