English
Geppetto is a 2000 made-for-television remake of the popular novel The Adventures of Pinocchio. It featured original songs written by Stephen Schwartz. Schwartz had developed the songs as a reunion for Mary Poppins stars Dick Van Dyke and Julie Andrews, but Andrews was undergoing throat surgery so the idea was dropped.

Geppetto dearly wishes to become a father. One day his wish is granted by the Blue Fairy.

In the beginning, everything is rosy for the new family, yet things slowly begin to unravel, culminating with Pinocchio running away. Geppetto, thinking Pinocchio would rather live with the evil Stromboli, washes his hands of the whole matter and tries to go back to his lonely life. Stromboli, however, had kidnapped him and was using him as the main attraction in his puppet show.

Geppetto finally comes to his senses and goes out to rescue Pinocchio, but he has run away from Stromboli to the infamous "Pleasure Island" (Usher has a cameo as the Ring Leader of Pleasure Island). On his way there, Geppetto has several chance encounters, including a professor that creates children to precise specifications and a struggling, traveling magician.

Pleasure Island is not all that it seems to be and Pinocchio is almost turned into a donkey. Fortunately, Geppetto arrives just in time to see him and to try and rescue him. They set sail on a small boat, but are hit by a storm in the middle of the sea, and swallowed by a whale. They manage to escape and forgive each other for their wrongs, and Pinocchio is turned into a "real boy" by the end of the film and all live happily ever after.

The soundtrack for Geppetto is available from Walt Disney Records, and it features songs from the film composed by Stephen Schwartz, as well as the single, "Since I Gave My Heart Away" performed by Sonya Isaacs (as heard in the end credits of the movie). 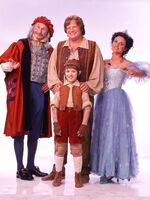 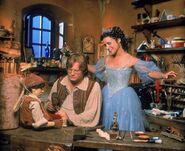