Disney Wiki
Register
Don't have an account?
Sign In
Advertisement
in: Characters, Articles with unsourced statements, Males,
and 7 more
English

Playing chess with himself, fixing damaged antiques, outsmarting his rivals

Being rushed to fix antiques, losing in chess

Geri is an elderly gentleman who is somewhat well-known in the Pixar universe.

He is the character in the short film, Geri's Game in which he enjoys a game of chess while playing with himself as if he were two different people; he puts on a pair of glasses on one side and takes them off on another. The prize for beating himself is his own dentures, which he would have inevitably acquired no matter how he won. Late in the game, one of his personalities (glasses) is losing badly, so he fakes a heart attack and switches the board around when the other personality (non-glasses) isn't looking.

During the events of the film, as Al McWhiggin (the owner of Al's Toy Barn and Woody's kidnapper) takes Woody out of the glass case for a snapshot with the Roundup Gang, Woody's arm falls off, prompting a panicking Al to call the cleaner over the phone. The cleaner is too busy, but promises to come over the first thing the next day, to which Al reluctantly accepts.

The next morning, the cleaner, who is revealed to be Geri, rings the doorbell to Al's Penthouse and begins the process of restoring Woody to prime condition for Al before he is about to be shipped to a museum in Japan. During the process, he cleans and repaints Woody's head, repairs minor damages, and is able to sew his severed arm back on; this may clearly be the hardest part of the restoration, reflecting his great skill. His final act of work was painting over Andy's name under Woody's boot.

Once Woody has been finished, Geri gives Al strict instructions that Woody is for display only, and that he won't last if played with. The directors of the film have stated that the restoration of Woody was done at no fee – he felt it was rewarding enough to work on such a rare toy. 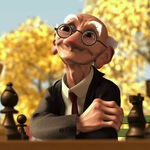 "Is the specimen ready for cleaning?"