Disney Wiki
Register
Don't have an account?
Sign In
Advertisement
in: Countries, The Avengers locations, Locations,
and 14 more

Germany, officially the Federal Republic of Germany (German: Bundesrepublik Deutschland), is a federal parliamentary republic in west-central Europe. Its consists of 16 states (Bundesländer), and its capital and largest city is Berlin. It covers an area of 357,580 square kilometers (about 137,847 square miles) and has a largely temperate seasonal climate. With 83 million inhabitants, it is the most populous member state in the European Union. It is one of the major political powers of the European continent and a technological leader in many fields.

Through most of its history, Disney has portrayed Germany in a negative light, since the United States (The country in which the Walt Disney Studios is located) were in a war with Nazi Germany during most of the 1940s. starting with WW2 propaganda shorts and moving to incorporate works in which the atrocities of the Nazis are explored. Even in modern times most German characters are either villainous (i.e. Helga Sinclair) or otherwise negatively portrayed (i.e. the dung beetles from The Wild).

The mouse shaped flag of Germany 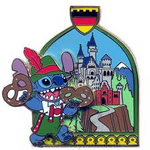 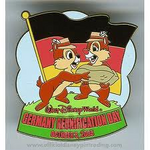 The flag of Germany