October 1, 1982
The Germany Pavilion is part of the World Showcase in Epcot at the Walt Disney World Resort. It was opened on October 1, 1982.

The original design of the pavilion called for a boat ride along the Rhine river. It was to have focused on German folklore, in a similar manner to the Mexico and Norway rides. According to the Walt Disney Company's 1976 annual report the ride was to be " ... a cruise down Germany's most famous rivers -- the Rhine, the Tauber, the Ruhr, and the Isar. Detailed miniatures of famous landmarks will also be seen, including one of the Cologne Cathedral."

Though the building was built, Disney did not complete the ride construction by opening day. It was announced to be part of "phase two" of expansion. To avoid costs, Disney dropped all phase two attractions and decided that any expansion projects would only be allowed if a host country funded for it. Because of lack of funding, the ride building is now used as storage space. You can see the main entrance hall, as it's now the dining area for the Biergarten. The ride building is used for storage for floats, a workshop, and cast member rehearsal space.

The Germany Pavilion is designed to look like a German town, but with architecture from different eras and regions. The Platz (square) is decorated with a statue of St. George and the Dragon and a clock tower. The Biergarten, at the rear of the courtyard, sells traditional German food. The pavilion also has numerous small shops selling German goods, including dolls and cuckoo clocks. The area near the pavilion is decorated by an extensive model village with working model trains.

Characters from the Walt Disney animated feature Snow White and the Seven Dwarfs, which was inspired by the version of the tale attributed to The Brothers Grimm, make appearances in and around the pavilion. 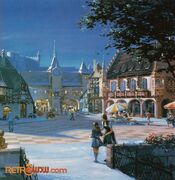