Get Set to Get Wet

Doc McStuffins
"Get Set to Get Wet"

It is a hot day for Doc McStuffins in her dolphin bathing suit, as her mother takes her to the park's wading pool with her toys until Lambie spots a toy mermaid, named Melinda, in her midst. Melinda keeps sinking to the bottom of the pool, so Surfer Girl helps her learn how to swim. 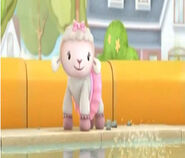