Feast
Get a Horse! is a 2013 black-and-white/color traditional/CGI hybrid Walt Disney Animation Studios short film. The short features archival voice recordings of Walt Disney as Mickey Mouse.[1] It was nominated for the Academy Award for Best Animated Short Film of 2013, but lost to Mr. Hublot.

The film begins as a typical 1920s black and white Mickey Mouse cartoon, with Mickey Mouse walking from his house and spotting Horace Horsecollar pulling a hay wagon with all their friends playing music. He hops on the wagon and helps Minnie Mouse and Clarabelle Cow onto the wagon. Just then, Peg-Leg Pete shows up in his jalopy, his horn bellowing "Make way for the future!" Pete spots Minnie and gives her a flirty gaze, but Mickey puts Clarabelle in the gaze in Minnie's place and Clarabelle plays the bagpipes with her tail and udder, causing Pete's viewing line to droop in disgust and horror. Mickey then switches Minnie back and they laugh. Angry at being pranked, Pete snatches Minnie and rams his car into the wagon, sending Mickey flying towards the screen. Seeing Mickey bounce off the fabric, Pete hurls him and Horace harder into the screen until they burst through the screen and land in the colored, CGI-animated modern world.

As Pete taunts Mickey from inside the screen and closes the hole in the screen, Mickey tries to get back into his world, pulling back the curtains to reveal a wider screen. Horace then walks onto the stage wearing a Captain America t-shirt and carrying a cellphone, Milk Duds and popcorn. Mickey decides to use Horace as a mock biplane to fly around the theater and fire at Pete with Milk Duds. When they crash land onto the stage, Mickey finds the smartphone Horace brought (and apparently stole) onto the stage, so he calls Pete on his candlestick phone and Horace sprays foam from a fire extinguisher into the smartphone and out from Pete's phone.

Pete's car then lands in a frozen lake and the screen fills with water, giving Mickey the idea to poke a hole in the screen with his tail and let the water leak out, causing Pete, Minnie and the other cartoon animals to flood out onto the stage. Mickey and Minnie's reunion is short-lived, however, as Pete gives chase to the characters in and out of the screen until he snatches Minnie again, punches Mickey onto a support beam and nails the screen shut. Horace and the others decide to swing from the beam and try to break though the screen like a wrecking ball, but the plan only manages to flip the screen upside-down, causing Pete to fall from the ground.

Mickey flips it again and Pete lands on the ground, his car crashing down on him. Getting an idea, Minnie encourages Mickey to flip the screen again, this time having Pete land on a cactus, which sets off a chain of events. First, Pete gets electrocuted on some telephone cables, then he has his face get hit by all the steps on a ladder. Then he lands his rear end on a pitchfork, then he falls onto a seesaw, where he gets hit on the head by numerous tools. A sledgehammer then rams the pitchfork deeper into his rear. Finally, the sledgehammer falls on the opposite side of the seesaw, where Pete is launched and lands face first in his jalopy.

Minnie then drives Pete's car with Pete in tow and completely tears the screen down, revealing the black-and-white world in color for the very first time. Mickey and his friends dance for a moment and re-enter their world. The horn that was on Pete's car tells an unconscious Pete to "Get a horse!" before Mickey and his friends bring down a new screen, then Mickey waves goodbye to the audience. As the iris out closes, Pete, comes to and tries to get back in through the screen, only to get his head stuck. Seconds later, the flap on Pete's pants open up to reveal the words "The End" on his butt and Pete bellows "Hey!!" as the screen cuts to the credits.

After the credits, the castle is in black-and-white and Clarabelle jumps over it, making the arch with milk.

Get A Horse! debuted June 11, 2013 at the Annecy International Animated Film Festival in Annecy, France.

Get a Horse! was conceived and directed by Lauren MacMullan (Avatar: The Last Airbender, The Simpsons), who became the first woman to solo direct a Disney animated film. She started working on the short after Wreck-It Ralph director Rich Moore told her that Disney was looking for some Mickey Mouse ideas for television. Being fond of the earliest Mickey Mouse shorts, mostly because of their simplicity and freshness, she decided on a style resembling the 1928/1929 animation. Produced in 18 months, its hand-drawn animation was supervised by Eric Goldberg and its computer animation by Adam Green. To achieve the 1920's look, aging and blur filters were added to the image, while for the CG part, they created new models, faithful to the character designs of that period.

It took about two weeks for the sound editors to edit Walt Disney's voice tracks to assemble the word "red" and make it sound like a surprised statement.

Active audio voice footage from various classic Disney cartoons were used in this short. Among of them include:

The Disney Wiki has a collection of images and media related to Get a Horse!. 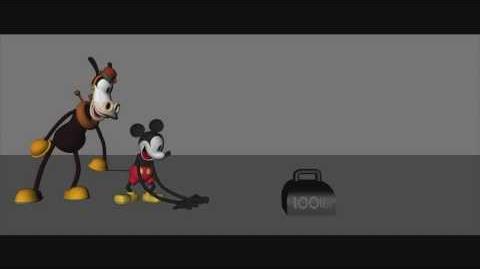