Her family, being healed, her powers, spying on people, her adoptive father Bill Foster, recharging her powers to keep herself stable

Her disease, fading away, being forced to do things herself, not getting what she wants, dying, her parents deaths, being used as a weapon, the Pym family (formerly), being tricked

Ghost  is a Marvel Comics supervillain that has the ability to phase and become intangible. She appears as the main antagonist of the Marvel Cinematic Universe film Ant-Man and the Wasp.

Ghost was created by David Michelinie and Bob Layton.

Ghost's main goal is to save herself from an unspeakable fate, and her determination to do so is such that she will endanger small children and manipulate the Quantum Realm. She can also get emotional, even though she has good reason to. Ghost is also very perceptive, something demonstrated by how she calmly interrogated Ant-Man, Wasp, and Dr. Hank, before speaking in a firm, biting tone and then speaking aggressively when things became more serious. After she was saved, however, she came to see her own life as worthless, thinking she deserved to die for what she had done to prevent just that, though her consolation with her adopted father seems to have mitigated this somewhat.

Ghost was an enemy of Iron Man's who had fought him several times in the past. However, after one of Ultron's failed schemes to destroy the world resulted in Terrigen Mists being released throughout the world, causing people with dormant Inhuman genes to undergo Terrigenesis and become Inhumans. It turned out that Morley was one of those many people, and upon emerging from the Terrigen cocoon, found that he had obtained actual phasing powers, no longer needing to do so with his tech.

In "The Kids are Alright", Ghost hatches a scheme to steal F.R.I.D.A.Y. and sink Avengers Tower. He did so by hacking into the tower's systems and tasing Falcon and Hawkeye.

Ghost appears in Ant-Man and the Wasp as the main antagonist alongside her adopted father, Bill Foster. The daughter of scientist Elihas Starr, a colleague of Hank Pym, Ava was affected with quantum instability following a disaster involving a Quantum Tunnel created by her father, which ended up killing them. Her condition caused her to periodically phase out of existence. While with a specialized suit, she could control and even utilize this, which was provided by S.H.I.E.L.D.. However, S.H.I.E.L.D. took advantage of Ava's condition, making her an convert operative not unlike Black Widow and Hawkeye. Eventually following the organization's desolution, Ava came under the care of Dr. Bill Foster, who provided her the means to prolong her life and resources needed in order to stabilize herself. However, what she needed were energies from the Quantum Realm. 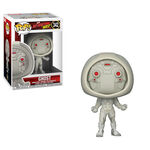 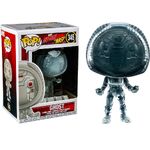