October 10, 2015
"Ghost Moon" is the first segment of the twenty-third episode of Miles from Tomorrowland, which premiered on October 10, 2015 alongside "Stormy Night in a Dark Nebula".

Miles and Loretta are playing hide and seek in the dark with M.E.R.C., who is an expert at the game and easily finds the two of them. Just then, Stella brings the lights back on and informs the Callistos to report to the bridge, as they are receiving an incoming call from the Tomorrowland Transit Authority. With everyone together on the bridge and after a spooky imitation from Admirals Watson and Crick, the Admirals brief the Callistos on their new assignment. They want them to Phantasmo, a moon that orbits the planet Freylack and where a TTA construction crew is currently building a hydroelectric charging station. For some unexplained reason the crew were scared away by what they believed was a ghost. They heard a lot of strange spooky wailing sounds. Now they refuse to go back until someone finds out what is making those strange sounds, which is where the Callistos come in. The Admirals want them to check the moon for ghosts, much to M.E.R.C.’s dismay but much to Miles’ excitement. With the briefing over, the Callistos set course for Phantasmo.

Upon arriving, the Callistos take the Star Jetter down to the surface and land near where the charging station is under construction. They find Phantasmo to be very spooky and swampy. They do not see anything out of the ordinary, but they do hear a strange wailing coming from somewhere deep within the swamp. M.E.R.C. is already afraid and, like a real ostrich, hides his head in the earth. The Callistos bring out the scout, and head out in the direction of where they believe the sound is originating from. They find their way to a fallen tree that goes across a canyon. Using it as a bridge, Leo drives the scout carefully across the tree. As he does so, Miles and Loretta begin to hear another sound and then suddenly out the fog a Graawk attacks them. The Callistos quickly make it to the other side of the canyon and escape the Graawk after re-entering the swampy forest. After losing the Graawk, they come across something big and tall. It looks like a giant ghost, but as the fog clears up it turns out to be just a dead tree draped in moss. Suddenly, the ground beneath them begins to crumble and they end up rolling out of control down a steep hill. Leo manages to steer the scout safety down the hill, and after making a successful jump across another canyon they land safely in the mud. No one is hurt and the Callistos hear that ghostly wail yet again. It sounded close. The Callistos look around and discover that it was just a group of Marsh-Frogs, a race of extraterrestrial frogs that can copy any sound they hear. While Loretta believes this solves the ghost mystery of what the workers heard, Miles does not think the mission is over yet. Since Marsh-Frogs repeat whatever they hear first it means where that ghostly sound originating from is still out there. The Callistos prepare to move on only to realize the scout is stuck in the mud. So the family get out and help tow the scout out with the winch.

The ghostly wailing continues to echo through the swamp, and with Phoebe’s permission Miles and M.E.R.C. venture out further into the swamp to check it out. They nearly go off the edge of a chasm, and discover what looks like a ghost. However, after Phoebe, Leo, and Loretta regroup with Miles and M.E.R.C., Miles does not believe it is a ghost as he points out that the strange wailing sounds electronic in nature, like a siren losing power. The family agrees, especially Loretta. The ghostly figure they are seeing reminds Loretta of an alien symbol. Checking her Bracelex, she identifies the shape as a help symbol from the planet Worlian. It is holographic flare from a starship, meaning that a ship has crashed on Phantasmo and someone is in trouble. Heading down into the chasm, Loretta has found a news report about a missing ship from Worlian. According to the report, the ship was last seen near Phantasmo and no one has seen or heard from the pilot since the day before. After reaching the bottom the emergency flare is gone and so is the siren, making their chances of finding the missing ship more difficult. But with help from the master of hide and seek, M.E.R.C., they quickly find the missing ship and its pilot, known as Nuala. With another successful mission accomplished, the Callistos reunite Nuala with her family and report back to Admirals Watson and Crick that Phantasmo is haunted free. 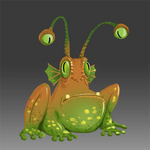 Add a photo to this gallery
Retrieved from "https://disney.fandom.com/wiki/Ghost_Moon?oldid=2273689"
Community content is available under CC-BY-SA unless otherwise noted.