This article is about the character from Zootopia. For other characters who share the same name, see Gideon.

His past misdeeds, being a bully

Active
Gideon Grey is a minor antagonist-turned-supporting character in Disney's 2016 animated feature film, Zootopia. He is a red fox that resides in Bunnyburrow.

A young Gideon is first seen heckling Judy Hopps during her play when she announces her dream of becoming a police officer, so she breaks the fourth wall to him.

After the performance, during a county fair event in Bunnyburrow, Gideon and his black-footed ferret friend, Travis, bully two lambs and a bunny child to take their fair tickets when Judy shows up and calmly demands Gideon to return the tickets to her friends. Gideon simply mocks the young rabbit and shoves her to the ground, to which Judy retaliates by kicking him in the face. Angered, Gideon claws Judy's cheek, drawing blood, and derides her, snarling that she'll never be anything more than a "stupid, carrot-farming dumb bunny".

He then leaves, feeling satisfied, unaware that Judy managed to slip the tickets out of Gideon's pocket and returned them to her friends. Gideon Grey would unknowingly become one of the driving points of Judy's character later in her life.

Fifteen years later, an adult and matured Gideon arrives at the Hopps family farm in his delivery van, which shows he has become a successful baker, and, after being inspired by their daughter, a business partner to Bonnie and Stu Hopps. Seeing Judy, Gideon awkwardly apologizes for his bad behavior from when they were kids, admitting he'd been a real jerk. Judy kindly accepts his apology by admitting she knows something about being a jerk herself.

They then hear Bonnie and Stu tell some of Judy's younger siblings to stay away from some violet flowers growing around their crops, which Gideon casually mentions are nicknamed "night howlers". Judy learns they have a severe psychotropic effect on mammals, bunnies (and all meek prey) included, and has a realization. She frantically rattles off on what she'd missed and takes her father's truck to drive to Zootopia, leaving her perplexed parents and Gideon wondering what got her so excited, as Gideon says, "I thought she was talkin' in tongues or somethin'."

"Bunny cop! That is the most stupid thing I've ever heard."

"Anyhow, I Brought Y'all all these pies." 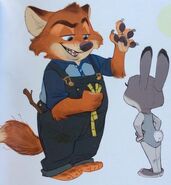